The Custodians of Rare and Endangered Wildflowers (CREW) summer-rainfall node hosted its annual workshop in April at Empangeni, KZN north coast. The success of this 3-day event was evident in the great enthusiasm and informative discussions held among the 60 participants. The weekend’s identification course was around the plant family Acanthaceae by Prof Kevin Balkwill, Head of School at the University of the Witwatersrand. After illustrating the genera within the family, Prof Balkwill allowed participants to identify a few genera using the keys and aided with microscopes to observe the sophisticated pollen structures in particular. The participants were left with greater understanding and motivation after this opportunity to identify the various genera within the Acanthaceae family. Fascinatingly, the Corinthian Greek and Roman architecture is characterised by slender fluted columns and elaborate capitals decorated with Acanthus leaves and scrolls!

iNaturalist custodian, Tony Rebelo captivated the CREW citizen scientists with the diverse functionality of this powerful biodiversity social network tool such that both the Friday and Saturday evenings were spent on iNat discussions. Keeping to the usual format, the Saturday morning slot was filled with highlights from the 4 CREW nodes (summer-rainfall, Eastern Cape, Cape Floristic and Limpopo). The fieldtrip to Enseleni Nature reserve was led by Ezemvelo KZN Wildlife ecologist, Sharon Louw and the nearby University of Zululand’s Prof Theo Mostert. Workshop participants were treated to a walk through the coastal grasslands and forest.

The 3rd and final day of the workshop began with Domitilla Raimondo, manager of the Threatened Species Unit at SANBI, providing an update of the National Biodiversity Assessment and the National Red Listing projects as well as a progress update of the National Plant Conservation Strategy. Thereafter Someleze Mgcuwa described SANBI’s Transcribe project whereby citizen scientists are capturing data from specimen labels to make it accessible for scientific research.

The CREW groups’ feedbacks were unlike the previous workshops whereby each group presented their highlights. This year, each group chose a topic related to unique plant conservation activities undertaken by the group. The Mpumalanga Plant Specialist Group detailed their specimen collection process; the Pondoland group shared their site surveying and mentoring students at the Umthamvuna Nature Reserve; and closely related to site surveying, the Gauteng group explained how their selected sites.

The CREW programme express our deepest gratitude to our citizen scientists for their remarkable work and to our funders (the BotSoc and the Mapula Trust) for making the significant work in plant conservation possible. 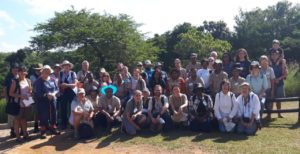 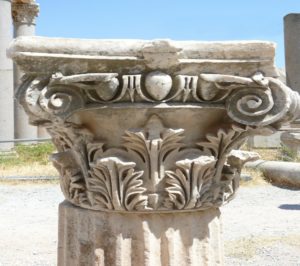 A Corinthian capital architecture with the Ionic volutes at the corners, perhaps reduced in size and importance, above the two ranks of stylized acanthus leaves (Photo: Ad Meskens) https://en.wikipedia.org/wiki/Acanthus_(ornament)#/media/File:Corinthian_capital1.jpg)