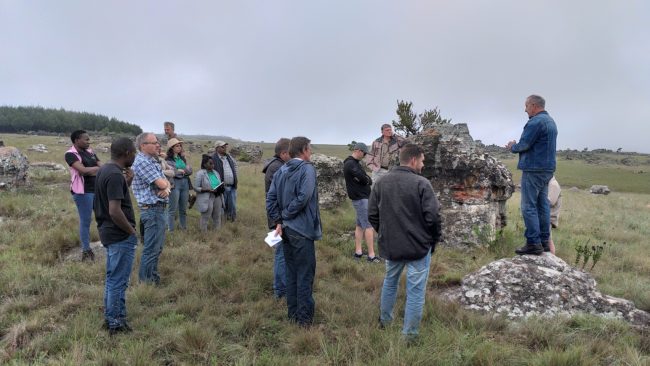 One thing that is synonymous with grasslands in South Africa is fire. In the escarpment areas around Kaapsehoop and Blyde in Mpumalanga, high levels of rainfall occur and so grass grows quickly which leads to an accumulation of dead moribund material that would ideally need to be burnt every two years.

Often not burning can be just as bad as burning too frequently (or under the wrong conditions) because grasslands eventually suffocate. These grasslands are also highly productive from a forestry perspective with high rainfall and deep soils and it is no surprise then that fire is a huge risk if you are managing a plantation in the escarpment.

Over the past year the Mpumalanga Tourism and Parks Agency (MTPA) with the Kruger to Canyons (K2C) Biosphere Region has been supporting the declaration of four Forest Nature Reserves that are leased and managed by South African Forestry Company Limited (SAFCOL)/Komatiland Forestry.

A crucial part of the support has focussed on consolidating information and developing management plans that integrate the management of natural areas where the primary objective remains the production of trees. It is clear that burning in these areas is crucial from a forestry and conservation perspective but oftentimes the methods and cycles of burning can have negative impacts on biodiversity. For example, hot frequent burns employed during winter months can have negative impacts on grasslands and biodiversity.

Patch mosaic burning (PMB) has been identified as a means to support biodiversity objectives in a forestry landscape. The PMB fire regime is characterized by fires ignited throughout the year, under cool moist conditions and these fires burn slowly and are very low risk. Working with MTPA and K2C, SAFCOL has shown an interest in testing these types of burns and during the summer of 2019 SAFCOL management implementing its first patch mosaic burn on Berlin plantation grasslands outside Kaapsehoop.

The feedback has been extremely positive and this learning was taken into workshops held towards the end of 2019 where burning plans were discussed based on a baseline of veld condition developed by Mr Francois de Wet. During the workshops sites were identified where patch mosaic burns will be implemented in the coming season and it became clear that these types of burns may also help reduce risk and cost for forestry organisations by avoiding burning during high risk times.

During an organised field day on 20 November 2019 a number of organisations spent time on the Blyde plantation getting a perspective of burning in these landscapes with discussions generated around patch mosaic burning and its application. Conditions were also good for a cool burn and a small piece of grassland was burnt and put out again adjacent to a plantation, which illustrates how safe these types of burns are if implemented under the right conditions.

Over the coming months a guideline for patch mosaic burning will be developed to serve as a tool to use when implementing these types of burns. It is also crucial that more monitoring and research is undertaken to better understand patch mosaic burning and its application going into the future.

MTPA and K2C are implementing partners in the Biodiversity and Land Use project being implemented by SANBI with funding from the Global Environment Facility through the UNDP.