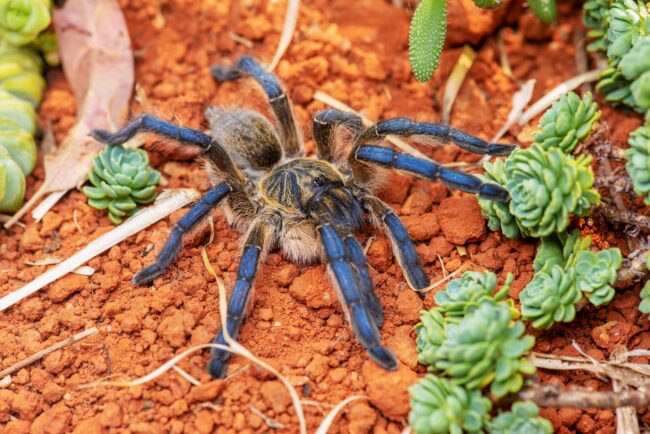 Somewhere in the deep recesses of the Iziko Museum in Cape Town, there is a small glass jar containing a dark, lifeless, spherical creature with eight protruding legs. The jar is two-thirds filled with the preserving chemical ethanol and a wad of cotton wool. A tight plastic lid that “pops” when opened. At the bottom of the jar lies an opaque ethanol resistant tag that reads: 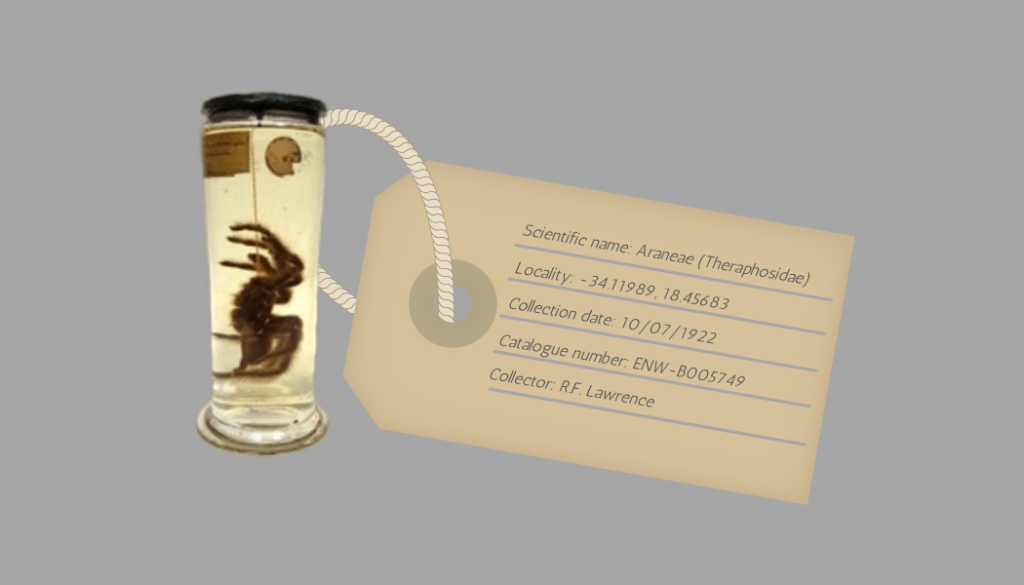 In 1922, a shy and slight 25-year-old by the name of Reginald Frederick Lawrence (‘Lawrie’) joined the staff of the South African Museum (now Iziko) as an assistant in charge of arachnids – the group of invertebrate animals including among other spiders, scorpions, ticks, and mites.

In July of that year and nearly 100 years ago Lawrie collected a baboon spider in Cape Town’s coastal suburb, Simon’s Town. Back at the museum, he took the necessary care to write the collection details (metadata) on a tag, ethically terminated the baboon spider, and placed it in ethanol. He identified the spider as belonging to the family Theraphosidae, the group of large, hairy spiders known as tarantulas.

Today, this jar contributes crucial information to understanding the baboon spiders of southern Africa. It informs us that a particular species of baboon spider was found in a certain place at a certain time – what scientists refer to as ‘spatial and temporal’ data.

There are about 2 000 such baboon spider specimens scattered in museums across South Africa. Many people are unaware that there is more to museums than public displays of historical and cultural artefacts. Behind the scenes are vast collections (like the baboon spiders) of preserved specimens, skeletons, and fossils depicting a wide range of different kinds of organisms. According to spider expert and Baboon Spider Atlas coordinator, Dr Ian Engelbrecht these collections form the bedrock of our understanding of life on earth. ‘They are the basic material that scientists use to identify, describe, and name species, forming the foundation of all other branches of the biological sciences, as well as conservation and natural resource management,’ he explains.

The Albany Museum in Makhanda houses an important arachnid collection. In 1945 a devastating fire broke out at the museum – the details are sketchy. Dr John Midgely who curated the entomology collection between 2013 until 2015 describes the damage caused by the inferno as ‘significant’.

Dr Midgely cannot recall the full list of losses but says the mammal collection was almost destroyed.   Several of the arachnid specimens were labelled with an accession code and brief information only, with their details captured in museum catalogue books. Unfortunately all this information was lost and fire monitoring was not installed in the museum due to the costs involved.

More recently, in mid-2018, a fire ripped through National Museum in Rio de Janeiro destroying an unquantified proportion of its 20 million specimens, while two years earlier the Natural Museum in New Delhi also lost much of its collection to flames. In both cases fire suppression was dysfunctional, and lack of funding and neglect were factors.

Dr Midgley’s take-home message is that unless museums are properly financed, these types of disasters will continue to happen and blaming this on the government is overly simplistic – society needs to accept that curation of our heritage is a shared responsibility.

An important part of preserving collections is digitising information related to these collections. Dr Midgley says digitisation assists in creating backup of data and allows for storage in multiple places.

During 2015 Dr Engelbrecht, under the auspices of University of Pretoria entomologist Prof. Catherine Sole, responded to a Foundational Biodiversity Information Programme (FBIP) funding call for Accelerated Data Mobilisation Grants. Her project proposal titled, Identification, digitization, and georeferencing of baboon spiders in South African museum collections was successful and the project would be funded from 2016 to 2017.

The work was part of the Baboon Spider Atlas project, which aims to properly describe and document Baboon Spiders in southern Africa . In a somewhat whirlwind tour, Dr Engelbrecht and his coworkers visited natural history museums across the country to review their collections of baboon spider specimens and to include those records in the Baboon Spider Atlas. These were the Albany Museum in Makhanda, the National Museum in Bloemfontein, the KwaZulu-Natal Museum in Pietermaritzburg, the Durban Museum, and the Iziko Museum in Cape Town.

With all of the collections, each of the baboon spider specimens was examined under a microscope to confirm species type, and all the data on where the specimen was collected was checked and recorded. The process did not always run smoothly according to Dr Engelbrecht who is known by his peers to be efficient and methodical.

‘It was sometimes hard to locate all the specimens in the collections. Some of the collections are a little neglected as there is limited funding available for museums to hire staff to manage them. So that was a bit of an unexpected challenge. It was also a big learning curve to see how long it could take to work through a collection of baboon spiders, with some larger collections requiring three weeks to work through,’ he said, adding ‘other than that it went quite smoothly.’ 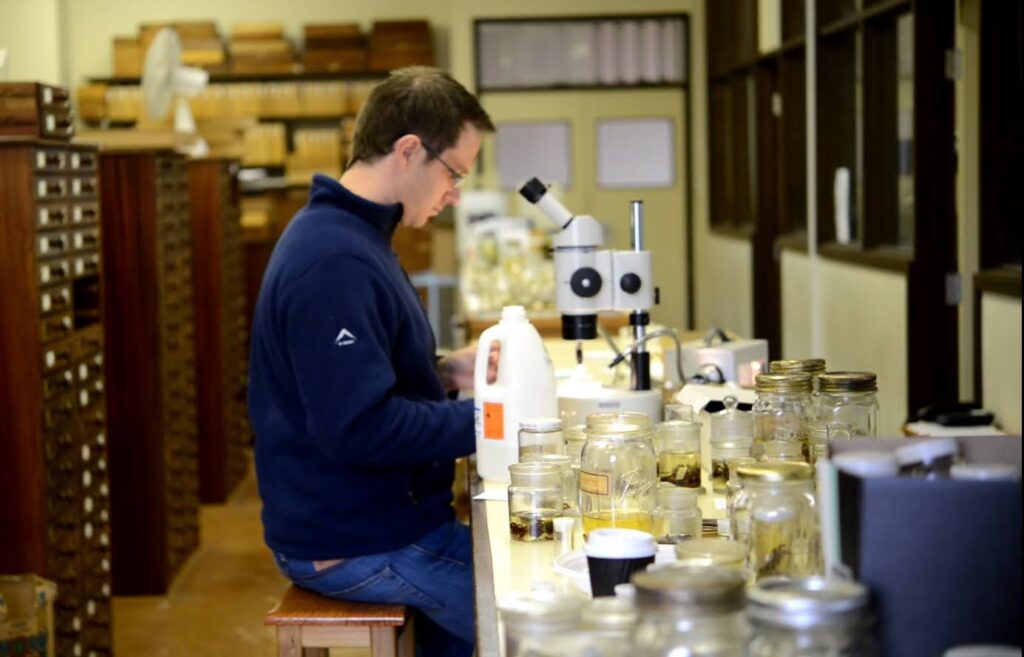 Baboon spiders are our largest and most charismatic spiders, and some of them are regarded as being quite beautiful too. There is both local and international interest in keeping baboon spiders, which are part of the Tarantula family, as pets. For this reason, they are protected by law in South Africa as a deterrent against unsustainable collecting from the wild. This is a real threat, as every year many wild-caught spiders are shipped from various parts of the world to the exotic pet markets in the United States and Europe.

Dr Engelbrecht says that despite their size (with leg spans ranging from 3 cm to the size of a man’s hand), baboon spiders are still relatively poorly understood, with many species remaining undescribed, and most species’ geographic ranges only partially known. Therefore, having quality geographic data for a species and a record of its occurrence is a key ingredient for understanding conservation needs and priorities. 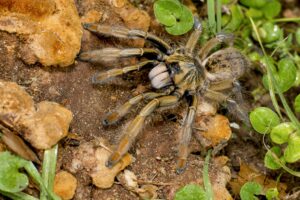 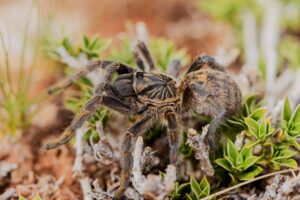 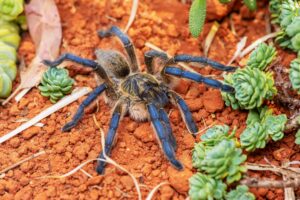 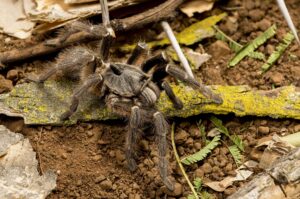 After returning to base camp in Pretoria they reviewed everything and added geographic coordinates to the locality data in order for it to be used for plotting maps and other kinds of analyses, such as species distribution modelling.

According to Dr Engelbrecht, there is a desperate need for more focused research on baboon spider taxonomy, as much of what is known is outdated or uncertain.

For some groups like the Pygmy baboon spiders (Brachionopus), the team could not identify most specimens to species level as these species have been poorly defined. ‘Sadly, the resources available for taxonomic research are scarce, and we haven’t been successful in securing funds for this type of work despite several attempts – but hopefully, it can be tackled in future,’ he emphasized.

An important aspect of the FBIP is that data produced from the projects it funds are openly accessible to the public and global research community – after all, the taxpaying public funds the work. To comply with this aspect of the programme, Dr Engelbrecht sent the final dataset to the Animal Demography Unit based at the University of Cape Town to be loaded onto their (SpiderMAP) database to make the data publicly accessible.

The dataset was also published to the Global Biodiversity Information Facility by the South African National Biodiversity Institute which manages the FBIP. The GBIF Baboon spider dataset is available here. The GBIF is an international network and data infrastructure funded by the world’s governments that aims to provide anyone, anywhere, open access to data about all types of life on Earth (link).

While Dr Engelbrecht was working through the Arachnid collection, Dr Midgley highlighted the importance of digitising museum specimen information. He said it was not only important for creating data that is stored in multiple places, but also to make it more accessible to scientists so that ‘hopefully some good science will come from it.’

Dr Engelbrecht seems to have enjoyed the project saying that overall, it was fantastic to visit the museums and spend time working on their spider collections. ‘We fixed many problematic or outdated specimen identifications.’ His team even managed to identify Lawrie’s 100-year-old specimen down to genus level – that is Harpactira.