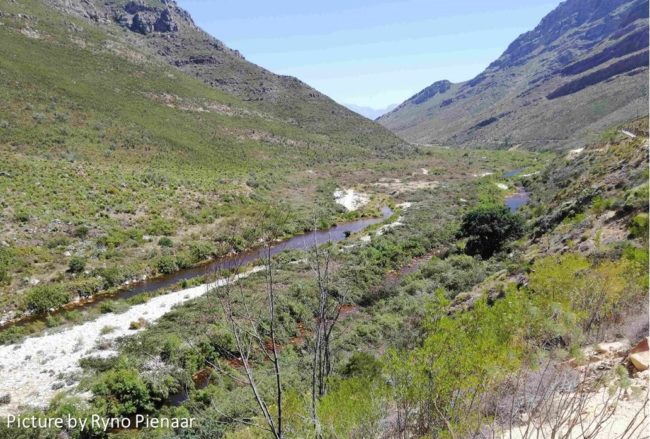 The Biodiversity and Land Use Project in collaboration with the Table Mountain Fund, recently completed implementation of the first set of Ecological Infrastructure Challenge Fund projects in the Cape Winelands District Municipality (CWDM).

Breedekloof Wine and Tourism as well as the Witzenburg Local Municipality’s alien clearing proposals were two out of five applications received for the Ecological Infrastructure Challenge Fund (EICF) that was approved for implementation. Both projects were located within the Boland Strategic Water Source Area and the alien vegetation clearing activities would have resulted in improved water quality and quantity in the area.

The objective of the EICF, is to increase resources allocated to biodiversity management while creating jobs through ecosystem restoration and maintenance at municipal level. To date the BLU project has six active EICF projects being implemented in Ehlanzeni District in Mpumalanga, uMgungundlovu District in KwaZulu Natal and the Cape Winelands District in Western Cape respectively.

South African National Biodiversity Institute (SANBI) partnered with the Table Mountain Fund (TMF) for project development and implementation of the Cape Winelands District Municipality projects. TMF has had extensive experience with small grants applications within the Cape Floristic Region and were thus the ideal partner for the BLU project to collaborate with in the area.

This strategic alignment and layering of investments allowed these projects to clear 967ha of alien plants while creating 6 069 person day jobs. An additional 206ha were also cleared during the follow up clearing resulting in a total of 1 173ha cleared, thereby exceeding these EICF projects’ hectare targets.

The project further managed to secure commitments from all relevant landowners to maintain this clearing and carry out further follow up clearing as and when required.