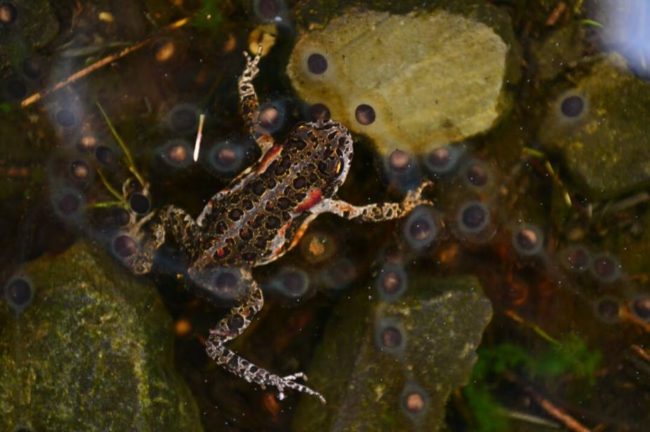 Rose’s mountain toadlet is a very small amphibian – adults grow to just 2 centimetres in length. These little toads can be found scattered across the mountainous, fynbos-rich biodiversity hotspot on the Cape Peninsula near Cape Town, South Africa.

The toadlet usually gathers to breed in a few small puddles that form during the winter rainfall season each year, in August and September. They rely on rainfall to fill their breeding puddles. But the region’s climate is altering, becoming increasingly dry.

New research my colleagues and I recently published in American Naturalist shows just how much this small toad’s survival depends on weather and, more specifically, on rainfall quantity. But part of our findings were rather unexpected: the population’s adult survival rate is higher in drier years than it is in wetter years.

This seems counter-intuitive. Why would survival be high in dry years for a species with a life cycle that depends on water? It turns out that these little toads seize the day: they adapt their breeding habits depending on the weather. It’s an approach that’s working for the species – for now. The Cape Town area is suffering from its worst drought in a century. While our study suggests that the adult toadlets will pull through this period, there’s a good chance fewer tadpoles will reach adulthood.

If this current drought worsens or reoccurs because of climate change, it seems likely this species’ population will decline in the long run. Adult survival in dry years is now extremely important and unexpected events that cause adult mortality – like high predation or overgrown breeding puddles – could take a heavy toll on Rose’s mountain toadlet.

Our research was carried out in Table Mountain National Park over a period of seven years. We marked and recaptured individual adult male toads over this period, allowing us to track their survival.

During the breeding season males gather at small puddles – which are only about 20 to 30cm in diameter and around 2cm deep – waiting for females to arrive. The females come in, usually one by one, and mate with males. After laying all their eggs in the small puddle, they quickly depart. The males remain there, waiting for the next female.

Rose’s mountain toadlets – these are metamorphs, just before the adult stage – are tiny.

This breeding strategy made it relatively easy to mark several hundred males at a breeding site each year, and to identify any males that had been marked in previous years. From this we were able to estimate an annual survival rate and to determine if the survival rate varied with rainfall.

Because these are amphibians, we expected survival to be higher in wetter years. Our findings proved us wrong. Here’s why.

Survival of the fittest

Our tracking system allowed us to see that in wet years, males stay longer at the breeding site because the puddles last longer. They wait – for days or even weeks – for females to arrive. This leaves them with little time to forage. After all, if they leave to find food they might miss their mates.

During their wait, the males start losing body mass. They get skinny because they don’t forage and this means that at the end of the breeding season they’ve lost their fitness. We think that makes them less likely to survive.

In dry years, the puddles last only a few weeks and the males depart in a healthier state without having lost body mass. They may not have reproduced, but they are still strong and so their own survival is more likely.

We also found more males at the breeding puddles in wet years and fewer in dry years. Although these toads are little, competition between males for access to females in a puddle is fierce. We consistently recorded mortalities in the puddles and assume that in high density wet years toadlets are more likely to be killed because of intense competition in the puddle.

It is possible – though it’s still speculation at this stage – that some adults chose to forgo reproduction in drier years because there is greater risk that their offspring will not survive. In wet years, recruitment is higher so it’s possible that most adults of both sexes will show up to breed.

Our findings are the first to show such large fluctuations in survival rates in connection with climate variability, although there is no reason to assume that this is unique to dwarf toads. For these little toads, life is precarious given that all predictions point to a rapidly warming and drying climate in southern Africa.