Skip to content
Home » News Room » Into the clouds: Surveying the Sky Islands of Mozambique (Part 1) 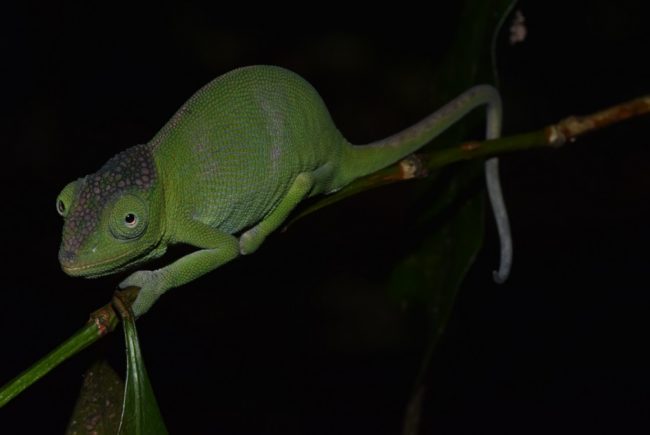 Researchers from the South African National Biodiversity Institute (SANBI), travelled to Mozambique to survey three mountains for reptiles and amphibians. They received a small grant from the Critical Ecosystem Partnership Fund though the Regional Implementation Team led by BirdLife International. Their aim was to gather data to update the information about an already identified Key Biodiversity Area (Mt Chiperone) and to identify two potentially new Key Biodiversity Areas (Ribáuè and Inago mountains). The survey team leader, Krystal Tolley, wrote the following article about their adventures, successes, and worries. 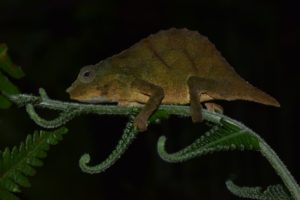 The Mount Chiperone chameleon, Rhampholeon nebulauctor, found perched on a fern. This species will be found on the ground in the leaf litter during the day, but climbs onto bushes or low vegetation in the evening to sleep.

The heat from the tarmac hit us, as we disembarked our flight from Johannesburg. The approach to the airport had been spectacular. As we descended, the landscape became clearer… dominated by massive granite domes, popping up from the earth like big, brown soap bubbles. The domes are scattered across savanna, but they themselves are small catchments for water and can support other types of life than what would be found in the drier savanna. From altitude, the advantage is that they are all visible at once, and to my eye, I could only wonder what life was teaming on them. We had arrived in Nampula, our staging point for what was to be 3 weeks of survey for reptiles and amphibians in three of the largest granite dome formations in Mozambique, Chiperone, Ribáuè and Inago mountains.

We were met at the airport by our logistics specialist, Mike Scott, a MacGyver-esque Zimbabwean who’s spent more time in the bush than out. Mike shuffled us out to the Landcruiser where our Mozambican team members already waited, Hermenegildo Matimele from the National Herbarium and Erica Tovela from the National Museum. The Landcruiser was already full… but true to form, Mike somehow got the rest of the gear into it, onto it or under it, and we piled inside. The arrivals from Johannesburg were the ‘herp team’ Werner Conradie from the Port Elizabeth Museum, Simon Loader and Gabriela Bittencourt from the Natural History Museum, London and myself. We had met Erica and Hermenegildo before, but hadn’t worked with them. This was all new but we had time to get to know each other; it would take us 1.5 days to get to our first stop 700km to the west, Mount Chiperone. 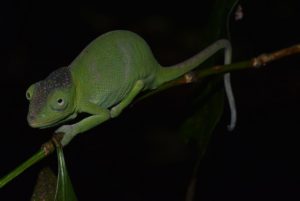 An undescribed species of chameleon (genus Nadzikambia) found in the forest of Mount Ribáuè.

The herp team was after reptiles and amphibians, collectively known as herpetofauna. Although not closely related at all (mammals and birds are closer to reptiles than amphibians are), these two groups of vertebrates are often thrown into the same basket. But to find the really interesting species, we needed to get up to the rainforest on Mt. Chiperone. It rises about 1600m out of the savanna plain, and catches rain which supports the forest. In fact, in the local language, the name Chiperone refers to this localized cloudy drizzle that forms over the mountain. So we needed to get up to the forest, which would require hours of walking up steep terrain. Fortunately, our second “MacGyver”, Dave Langerman was already on site.

He had done a ‘rekkie’ of the area in the days leading up to our arrival, and had already scoped out the route, and had set up a rough camp inside the forest. So we unloaded our gear into a big pile and took stock. We would need local assistance to get our things up the mountain, and after that was organized, we all headed up the mountain. We were a long string of human bodies winding through the bush. Except for the person directly before, only tops of heads were visible…almost like an enormous half hidden mamba.

As we progressed, the incline sharpened and we slowed. Worse, the steep slopes were covered in ‘machamba’ which is the local name for subsistence agricultural fields. The machamba were in full baking sun, and in some places what seemed to be a 45° angle. With climbing one step at a time, and copious water breaks we became we spread out and the mamba uncoiled into a much longer string. The local assistants were incredibly swift and they outpaced us easily. After some hours, we hit the forest edge and there was cool relief from the interior of the forest. About 10 minutes further in, and we found our camp. The local helpers were already there, as was Dave who was bustling around sorting out the gear. Starting to get dark, we had to quickly choose our tent sites, clear away the brush and get them pitched. No rest for the weary. 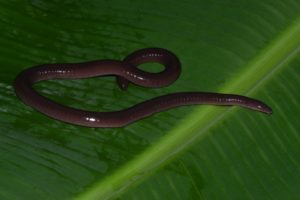 A caecilian, which is a legless amphibian that usually lives underground, was found at Mount Chiperone.

Of course, with the darkness we herpetologists come alive. There are boundless creatures to be found at night. So we headed out toward the river with our torchlights to look for frogs, snakes and chameleons. First night lucky! Only a few metres from camp the first chameleon was spotted. While there is one species known from this mountain already (Rhampholeon nebulauctor), this was clearly not that species. It was a previously unknown species from the genus Nadzikambia. We suspected such a species might be on Chiperone. A few other researches had done surveys there before, but nobody had found it. Yet there it was, almost glowing green in the torchlight. Our first reptile of Chiperone, and it’s a new species! Lots of screaming and laughing followed, and bets on if we’d find more, and how quickly. Only 10 more meters and another one loomed in the trees. Wow, this really made the punishing hike up the mountain worth it.

Frogging at the river came next, and while no new species were found, we were documenting the species for the first time ever on this mountain. This was essentially the first herp survey data from Mt. Chiperone. The mountain is considered a Key Biodiversity Area (KBA) and thus a priority area for conservation. Yet to date, the actual biological survey data to support this KBA is scarce. On our survey, we found 14 species (7 amphibians and 7 reptiles) most of which hadn’t been known from the mountain. Another highlight was finding a caecilian.

These are legless amphibians that usually live underground or in the leaf litter. This makes them very difficult to find, and while we did dig in the more obvious places (under stumps, anywhere damp) in the hopes of uncovering what was lurking beneath the soil, we were coming up empty handed. By chance, as we scrambled up a slope covered with leaves, one popped out and started squirming around where we had disturbed the soil. We jumped into action, shouting and scrambling around, to grab it before it got away… laying our hands on it mere seconds before it escaped under the leaves and we now had the most southern record ever of this enigmatic group of amphibians!