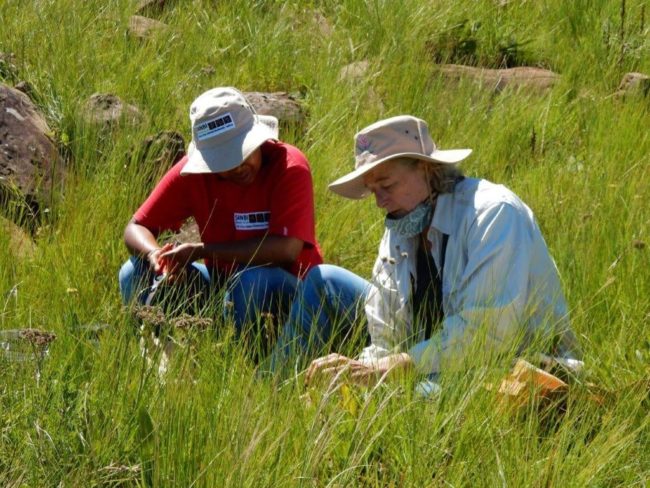 A team from the South African National Biodiversity Institute (SANBI) and the Botanical Society of South Africa (BotSoc): Inland Branch, partnered in an effort to protect Aloe kraussii. This was a deliberate effort to conserve plants outside their natural habitat, also known as ex-situ conservation. Two visits were paid to Greytown where Lake Merthley, lying in the midst of a beautiful KwaZulu-Natal midlands grassland, is situated. During the first trip to the area A. kraussii was in full flower and the yellow flower heads could be seen everywhere. Quite a spectacle to behold!

The second trip proved to be a bit more challenging as the flowers were gone and the seeds were well camouflaged among the grass. The trip was a huge success, nevertheless, and the team managed to collect seeds not only seeds of A. kraussii, but also of other plant species such as Watsonia canaliculata, Searsia discolor and Crassula vaginata. 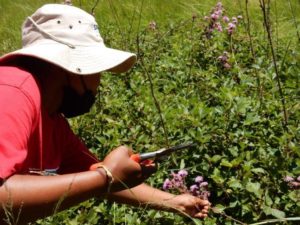 After this successful venture a nasty surprise awaited the team on their return as a very unwelcome intruder was discovered in the grassland; the infamous pompom weed (Campuloclinium macrocephalum). This is a perennial herb and member of the daisy family (Asteraceae) that originates from South America. It is listed in South Africa as a Category 1a Invasive Alien Plant in the National Environmental Management Act (NEM:BA) of 2004.

A battle to be tackled head-on

Fearing for the future, the team could not let this intruder go untouched, and, although they didn’t plan to embark on an alien invader clearing trip, they tackled it head-on. The flower heads of the pompom weed were cut off and safely secured in a sealed plastic bag to be burned later. Luckily the plant did not set seed as that would rapidly continue its spread. 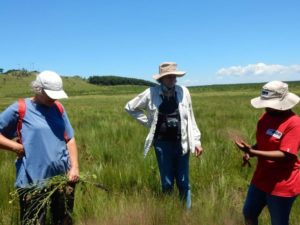 We are all champions for the environment

As champions of biodiversity, SANBI and BotSoc call upon the public and all other stakeholders to assist in this ongoing battle to curb the spread of invasive alien plants. Every effort helps and each of us can do our bit for the environment wherever we are. This is a fight to be tackled by every South African as our livelihood depends on the sustainability of our natural resources.

For more information contact Bathabile Ndlovu on 033 344 3585 or send an e-mail to B.Ndlovu@sanbi.org.za