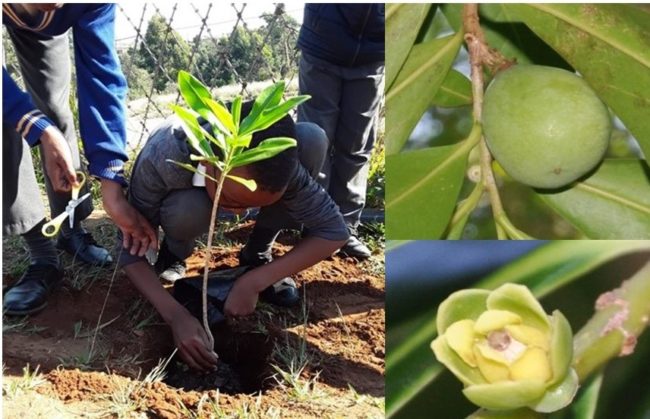 The pepper-bark tree (Warburgia salutarus), ‘isibhaha’ in isiZulu, is a highly endangered indigenous tree used to treat common ailments including colds and flu.  Sappi grows these and other indigenous plants as part of an initiative to preserve South Africa’s threatened and endangered species, and provides them to participating communities free of charge.

So when Dave Everard, Sappi’s Environmental Manager generously offered Warburgia seedlings to members of the project team engaged in the rural development initiative in Ozwathini in 2017, they were gratefully accepted.

Two batches of 100 were acquired for Ozwathini.  The first batch was planted out at five schools, with the second being distributed to smallholders throughout the greater Ozwathini area, to be established close to their dwellings for protection and care.  Plantings at the schools were used as an opportunity to teach pupils form all levels the importance and uses of indigenous plants in the ecology.

The plant is rare enough to be unknown to many of the people, although most had heard of it.  Traditional medicines play an important role in rural areas, and the seedlings were enthusiastically received.  The bark of the tree contains powerful healing properties and is in demand at traditional muti markets.

A follow-up survey to gauge the success of these plantings was undertaken a year later, with mixed results.  In cases where the trees were growing in positions subjected to disturbance – for instance close to playgrounds – mortality was high and the condition of surviving trees poor.  The causes of mortality in some cases were not possible to establish.

The tree is slow-growing, and despite the copious summer rains, growth on most sites was not prolific. One school was able to water the plants, which were well protected from disturbance, and these were flourishing, with copious lush leaf growth, although they had not gained much in height.

In spite of mixed success, the project has been worthwhile.  The tree is slow growing and challenging to grow from seed and cuttings, and when under stress holds back on seed production.  Greater emphasis on siting and on-going tree care would be of benefit.

The concept of endangered species such as W. Salutaris needs careful explanation to the new caretakers.  Such plants require extra-special protection and care, at least until they are more robust and able to survive a bit of disturbance or adverse weather.

The Biodiversity and Land Use Project’s work in the Umgungundlovu District Municipality extends to the Ozwathini area, where a number of programmes have been run under the auspices of SANBI, NCT and UCL, for the benefit of small scale timber growers, and the community in general.  Part of the focus of these programmes has been the promotion of ecological awareness.

Warburgia salutaris is formally protected under SA legislation in the revised National Forests Act (2012) and the National Environmental Management Act (2004).