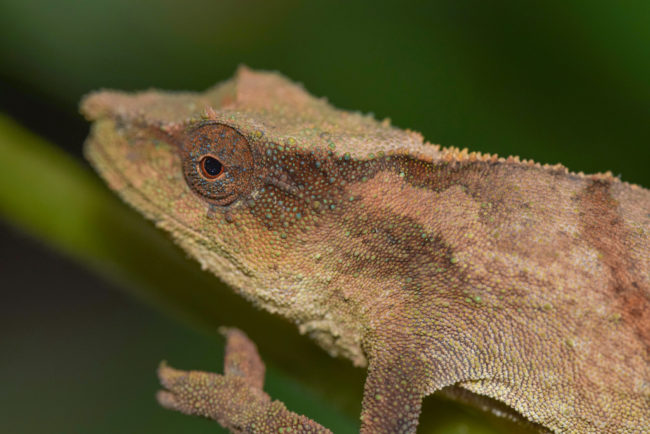 Rare Chapman’s pygmy chameleon (Rhampholeon chapmanorum) long feared to have gone extinct, has been rediscovered in the rainforest in southern Malawi. The chameleon is an incredibly small lizard that reaches a maximum length of only 6.2 cm, and unlike most chameleons that live above the ground, these diminutive reptiles live on the forest floor where they blend in with dried leaves.

A conservation assessment conducted in 2014 by Professor Krystal Tolley of the South African National Biodiversity Institute (SANBI) led to the listing of the Chapman’s pygmy chameleon as Critically Endangered on the International Union for Conservation of Nature (IUCN) Red List of Threatened Species, making it one of the world’s rarest chameleon species.

Much of the natural forest habitat of the Chapman’s pygmy chameleon has been cleared for maize and cassava plantations. Image by Krystal Tolley.

Under the threat of an ever-vanishing habitat, researchers from the South African National Biodiversity Institute and the Museums of Malawi, turned to crowdfunding website ‘RocketHub’ to raise money needed to survey the area for any surviving chameleons. Chameleon supporters rallied for the cause and the team raised enough funds to search for chameleons in the Malawi Hills. The researchers surveyed two of five remaining forest patches.

Tolley and her team found the pygmy chameleons at all three of the surveyed locations. “We found the first chameleon in the transition zone on the forest edge, where there are some trees but mostly maize and cassava plants,” said Tolley. “When we found it, we had goosebumps and just started jumping around. While we were excited to find these chameleons still clinging to survival, we have no idea how much longer these populations will persist in these tiny patches of forest.” Tolley collected tissue samples from chameleons in each forest patch to investigate the genetic health of these populations. 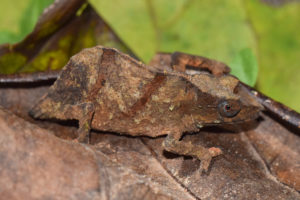 The Chapman’s pygmy chameleon uses its camouflage to blend in with dry leaves on the forest floor. Image by Krystal Tolley

Genetic analyses suggested the remaining populations of pygmy chameleons are not able to travel the long and exposed distance between forest fragments to mate, leaving them at risk of becoming genetically isolated. Genetic testing of the rediscovered chameleons revealed that while it hasn’t happened yet, this constriction in the gene flow between the isolated populations will likely reduce their genetic diversity over time.

“The forest loss requires immediate attention before this species reaches a point from which it cannot return,” Tolley said. “Urgent conservation action is needed, including halting of forest destruction and recovery of habitat to promote connectivity.” The researchers are calling for more surveys and monitoring of the chameleon populations as well as conservation action.