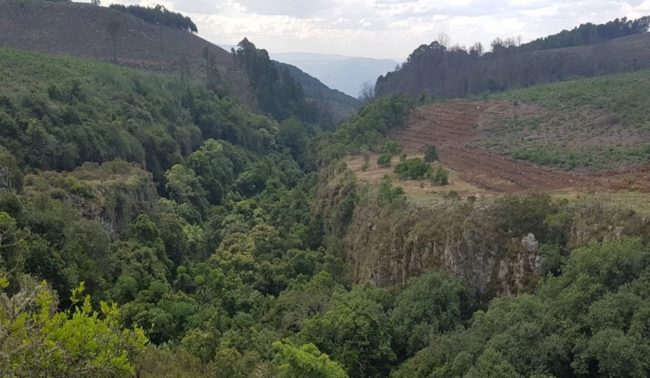 The rehabilitation project being implemented by the Kaapsehoop Heritage Association on the Battery Creek Gorge, located on the Berlin Forest Plantation has generated a number of socio-economic benefits for the community in the area whilst looking after nature.

The Battery Creek Gorge is located within a short walking distance from the town of Kaapsehoop in the Mpumalanga Province.  The views from the Gorge are spectacular and the view of the Battery Creek waterfall is impressive from the edge of the gorge.  Upstream of the Gorge and waterfall is the Battery Creek perennial stream feeding the waterfall and flowing through pine plantation.  The area is characterized by high rainfall, ranging between 990 to 1540 mm per annum and is located within a Critically Endangered Ecosystem, namely the Kaapsehoop Quartzite Grassland ecosystem.

However, the site was largely inaccessible due to the presence of pine discard material from the recent clear felling of pine plantations along the Battery Creek Gorge which resulted in a degraded environment, characterized by bare soil and the prevalence of invasive species like Silver Wattle, bugweed and bramble.

This rehabilitation project is a demonstration of biodiversity conservation stewardship within a forestry context and aimed to rehabilitate an area of 3.6 hectares along the edge of the Battery Creek Gorge.

Through this project a number of environmental benefits were achieved including: the habitat of various plant and animal species were improved; the Ecotone of the cliff edge was protected; soil erosion controlled; lower invasive plant infestation (and lower costs to maintain in the long term); improved landscape aesthetics and compliance to environmental guidelines.

The socio-economic benefits resulting from the various activities undertaken on the site included raising awareness and building capacity of the community on the importance of environmental rehabilitation; creating employment; enhancing the tourism potential of the area, thereby increasing tourism opportunities and job creation. The project is being implemented as a demonstration for forestry with regard to rehabilitation of excised areas, and as such co-operation between forestry and conservation was required.

Good rainfall following the sowing of grass seeds has resulted in successful germination and good grass cover with an estimated 65% success rate with regard to grass seed germination and growth.  Critical to the success of the project is to follow up with regular weeding of the re-grassed area and the clearing of alien invasive species by felling and hand pulling of seedlings and applying stump or foliar spraying with herbicide.

This rehabilitation project is a joint collaboration between the Kaapse Hoop Heritage Association, the Mpumalanga Tourism and Parks Agency and Safcol, with funding from the Kruger to Canyon (K2C) NGO and has already showed signs of success.  It contributes to the work of the Biodiversity and Land Use project activities in the Ehlanzeni District Municipality.