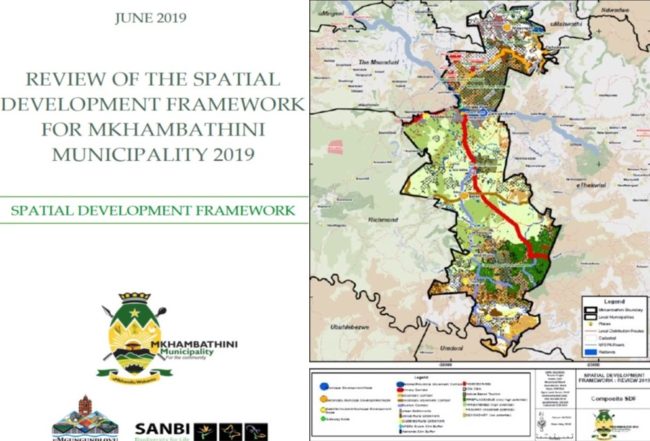 The project’s Planning and Land Use Management (PLUM) team have been tasked with ensuring that this mainstreaming happens at a municipal scale by the inclusion of biodiversity layers  into the Spatial Development Frameworks (SDF) of municipalities that fall into the districts the project is being implemented in. The aim of this intervention is to minimize the negative impacts on biodiversity that may result from various development pressures.

In 2017, the review of the Ehlanzeni and uMgungundlovu District Municipalities SDFs, including their respective local municipal SDFs was conducted. Findings of this review provided a clear picture of whether biodiversity information were included in the SDFs and if they were, the extent to which they were included. The findings and recommendations were presented to each local municipality for consideration in the next review of their SDFs.

Over the past few years the PLUM team has been actively working with partners in the districts and engaging with municipalities through various platforms and capacity building opportunities to emphasize the importance of biodiversity and how it can be included in their SDFs.

The PLUM team served on the District Steering Committee Meetings and through this platform provided specialist technical inputs and advise into municipal processes as the respective SDFs were reviewed and updated. The BLU project also co-funded the development of an SDF for the UMkhambathini Local Municipality.

With the BLU project drawing to a close, a second review of the SDFs was undertaken. The purpose for the second assessment was to compare the findings from the first review with that of the second review, and to ascertain whether the biodiversity layers have been incorporated in the SDFs and the extent to which they have been incorporated. The municipalities that developed new SDFs include uMkhambathini, uMshwathi, uMngeni and Richmond, all located in uMgungundlovu District Municipality

The findings of this second review, indicates that all of the new SDFs have incorporated the recommendations provided by the PLUM team in the 2017 SDF review process throughout the process, in a meaningful, appropriate and feasible manner. The future development proposals indicated by the SDF are linked to all biodiversity features in terms of avoiding development in sensitive areas and suggesting development that aims to support biodiversity.

The SDFs suggest that the municipalities should develop plans on dealing with the development issues and encourage the landowners to participate in conservation programmes including biodiversity stewardship. It also suggests the development of the local areas plans for the areas with development pressures so as to minimize threats to biodiversity.

Composite maps of most municipalities include environmental sensitivities being overlaid with dense rural settlements, commercial agriculture and the  road network. This has been identified as a challenge in most municipalities where rural settlements are encroaching in the CBAs and towards PAs.  Agricultural activities are also overlaid with 32m buffer from the watercourses and National Freshwater Ecosystem Priority Areas (NFEPAs).

The significant improvement on the uptake of biodiversity information into the SDFs is a favourable indicator of the successful interventions of the PLUM team and their partners’ interventions. The cooperative governance between SANBI through the BLU project, Ezemvelo KZN Wildlife and Department of Economic Development, Tourism and Environmental Affairs (EDTEA) has made things easier for planners to understand the requirements of these three parties in the development of the SDFs.

The Minimum Standards for Environmental Consideration into the SDFs played an important role in ensuring that biodiversity is clearly incorporated into the SDFs.