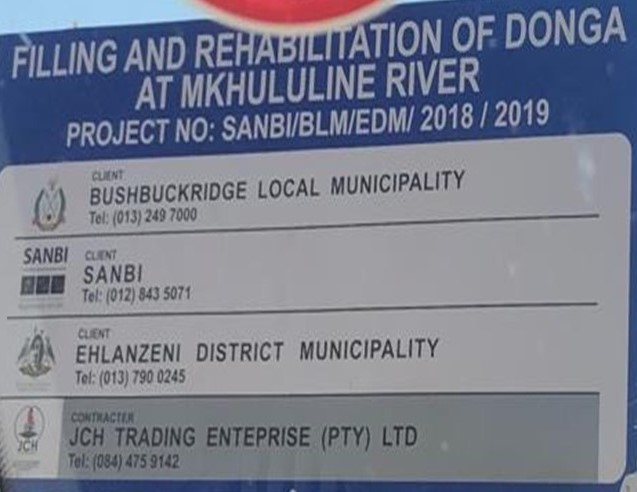 The Ecological Infrastructure Challenge Fund (EICF) has recently seen one of the projects supported through the Fund completed. The Donga Gabion Rehabilitation project was implemented, in the Arthurseat Mokhululine area of the Casteel region under the Bushbuckridge Local Municipality. The area is characterised by the Motlamogatsane/Klein Sand River that runs through the area of Mokhululine and Arthurseat, which are villages in the project area.

The project area is predominately rural and prone to flooding. In addition, large dongas have formed along the road which poses a great public safety risk. The dongas have also become sites for pollution and have resulted in  siltation of the river due to erosion.

The aim of the Donga Rehabilitation project was to rehabilitate the damage caused by erosion, which in turn would improve the status and functioning of the freshwater ecosystem, improve water quality and quantity as well as enhance public safety through the installation of disaster risk preventative infrastructure.

The Donga Rehabilitation project originated from the Ehlanzeni Disaster Management Advisory Forum that brings together various stakeholders to discuss disaster risk reduction strategies within the District. The project is a partnership between SANBI, Ehlanzeni District Municipality, and the Bushbuckridge Local Municipality with partners all contributing towards the implementation costs.

This has given us an opportunity to engage with the engineers on the project and strengthen the case for how ecological infrastructure can benefit built infrastructure.

In December 2019, when the project was almost completed, the area experienced unseasonably heavy rains, which caused damage to the site. Although this was a setback, it was a valuable test of the rehabilitation activities undertaken.  The repair work is currently taking place on the site and Bushbuckridge Local Municipality has added the project to its ongoing maintenance project list.