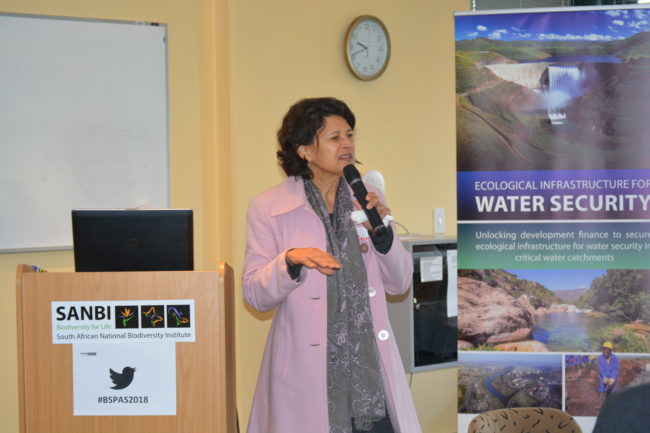 Head of the Biodiversity Science and Policy Advice Branch Ms Carmel Mbizvo, gave an overview of the 2017 BS&PA External Review process. She said “SANBI has, over the last decade since its establishment, produced a substantial and evolving body of work towards fulfilling its mandate”. Ms Mbizvo emphasised that the External Review adopted a qualitative approach which included self-assessments, as well as individual and focus group interviews with internal and external stakeholders.

This approach allowed for input from partners and stakeholders, who are key to the delivery of SANBI’s broad mandate. Ms Mbizvo further highlighted that the External Review forms an important part of SANBI’s organisational learning process by informing current programmes and shaping new initiatives. It focused on the following:

Four SANBI Chief Directors then set the scene of the day by sharing key findings and recommendations that emerged from the External Review. Thereafter the organisers of the event introduced a world café method, which is a structured conversational process for knowledge sharing.  Participants were split into groups, wherein each group had a specific topic to address. Individuals had to ensure they switch and participate at all groups.

Rich conversations and findings were shared amongst the participants, in the following four focus areas or groups: 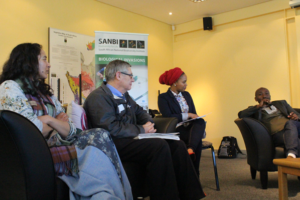 Discussions and engagements which focused on ideas, actions, solutions and challenges facilitated by table hosts were later shared in plenary to all present.

The event ended with an open panel discussion that allowed long-term and newer SANBI staff to share their journey at SANBI with the audience, and reflect on their reasons for working at SANBI.

The day and event proved to be highly productive and engaging, attracting nearly 80 SANBI staff. The symposium allowed for deeper discussion and understanding of the relationship between SANBI’s biodiversity science and policy advice and the full SANBI value chain. It also allowed for a purposeful and productive conversation about SANBI’s organisational role in the sector.

“Having the external and internal review was wonderful. But taking this review further by openly gathering the thoughts and reflections from the people that invest their energy daily in fulfilling SANBI’s mandate was indicative of a healthy organisation that is not afraid to evaluate and evolve to become more effective at fulfilling its role” said SANBI’s Vegetation Scientist Anisha Dayaram. It is important that all staff are provided the opportunity to engage in organisational processes such as Reviews.

All present were encouraged to continue with the discussion and engagements in their teams and directorates, as the strategic connections which emerged from the four focus areas will be used to feed into the broader Biodiversity Science and Policy Advice Branch matters for senior management to take forward.