South African National Biodiversity Institute (SANBI) Kirstenbosch National Botanical Garden has won a gold medal at the 2019 Chelsea Flower Show, this is the 37th time that SANBI Kirstenbosch will be bringing home gold from this highly anticipated event on the British calendar.

The Kirstenbosch Chelsea Flower Show Exhibit has been proudly representing South Africa’s diverse floral kingdom at the Chelsea Flower Show for 44 years. This year’s exhibit was indeed a show-stopper, with its cutting edge design featuring a slate mountain, dotted with abstract waterfalls cascading from bright larger-than-life traditional Ndebele hats, and masses of proteas, arums, restios and fynbos arranged as they occur together on the wild slopes of some of South Africa’s mountains.

Leon Kluge, the designer behind Kirstenbosch’s 2019 exhibition titled ‘Mountains of Abundance’ – created a contemporary hand-made three metre high slate mountain, with one side depicting a silhouette of Table Mountain and the other of the Magaliesburg.

According to Kluge, who also designed last year’s gold medal winning display, each plant featured in the exhibit has a story to tell and showcases the phenomenal spectrum of South Africa’s flowers to the world. “In addition to restios and fynbos, we have King Proteas in all the different colours this year – something I am very excited about.  There are also rarer kinds of proteas included – such as a small species that lie on the sand and gets pollinated by mice.  All the plants have come together to produce a magical showcase of only a fraction of South Africa’s biodiversity.”

“The pressure is always on to produce an exhibit that will surpass the previous years. Thankfully, we managed to do exactly that and are extremely proud to be bringing home another gold medal!  Special thanks go to everyone involved in the creation of this year’s Kirstenbosch Chelsea Flower Show Exhibit – we have an amazing team.  It is a lot of hard work but the atmosphere at the Chelsea Flower Show is always wonderful – from fellow exhibitors and the public attending the show,” says Kluge.

SANBI Board Chair, Mrs Beryl Ferguson, “I thought that last year’s exhibit was magnificent, but 2019’s design has taken things to a new level.  Seeing Leon’s designs come to life has been so exciting and in reality the exhibit is even more impressive and representative of South Africa’s rich natural heritage.” 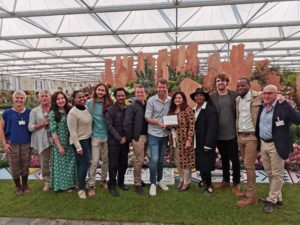