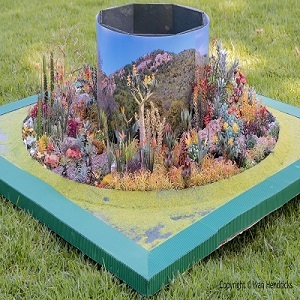 South Africa in Bloom – 42 years at the Chelsea Flower Show

In the 42 years that SANBI-Kirstenbosch has been exhibiting – and winning medals – at the Chelsea Flower Show, the range of flora that has been showcased is a testament to the incredible floral wealth of our country.

“The richness of our biodiversity is one of South Africa’s greatest natural assets,” said Dr Tanya Abrahamse, SANBI CEO.

“South Africa is home to nearly 10% of the world’s plants and contains three regions that have been declared global biodiversity hotspots, so it is fitting that we celebrate this heritage this year at Chelsea.”

Designed by the award-winning team David Davidson and Raymond Hudson, the exhibit will provide a glimpse of all nine of South Africa’s biomes to the over 150 000 people who are expected to visit the Chelsea Flower Show.

As always, the success of the stand depends on the enthusiastic team of volunteers who join the designers and SANBI representatives in ensuring that our display is perfect in every way.

This year the SANBI team will include Lihle Dlamini, Lufuno Nenungwi, Mashudu Nndanduleni and Felicity Poole.

Kirstenbosch National Botanical Garden: founded in 1913, is world-renowned for the beauty and diversity of the Cape Floral Kingdom it displays as well as its incomparably magnificent setting against the eastern buttress of Table Mountain. The Kirstenbosch estate covers 528 hectares and supports a diverse fynbos flora and natural forest. The cultivated Garden (36 hectares) displays plant collections mainly from the winter rainfall region of the country.

Harold Porter National Botanical Garden: Uniquely located within the Kogelberg Biosphere Reserve, and situated in the centre of the coastal fynbos where the flora is at its richest, this beautiful garden encompasses mountain slopes with wind-clipped heathlands, deep gorges with relict forests, flats and marshes with restios, sedges and bulbs, as well as dunes adjacent to the beach with specialised salt-adapted plants. The Garden is renowned for its waterfalls and amber pools. It showcases more than 700 species of indigenous South African plants and over 100 species of birds.

Hantam National Botanical Garden: This garden forms part of the north-western border of the Cape Floristic Region. Comprising 6 200 hectares and lying about 730 m above sea level, it serves as a centre for biodiversity research in the Bokkeveld Plateau and Succulent Karoo region.

Walter Sisulu National Botanical Garden: This 300 hectare garden consists of a mosaic of grassland and savanna, with dense bush in kloofs and along streams. The variety of habitats in the Garden accommodates over 600 naturally occurring plant species and is home to an abundance of wildlife. Some 412 indigenous tree species can be found in the Walter Sisulu NBG, of which 69 (17%) occur naturally in the Garden.

Lowveld National Botanical Garden: Situated in the heart of Mpumalanga and straddling the Crocodile and Nels Rivers with the spectacular Nelspruit Cascades, this Garden is a true urban haven for biodiversity. In addition to the 600 plant species occurring naturally in the Garden, more than 2 000 other species have been planted including over 650 of the approximately 1000 tree species indigenous to South Africa. The Garden’s main interpretive Riverside Trail allows visitors access to the natural riverine bush along the Crocodile River with over 140 plant species, including huge fig trees and lichens that grow flat against the rocks.

Free State National Botanical Garden: On the outskirts of Bloemfontein, in a valley between picturesque dolerite koppies, the natural vegetation of this garden comprises tall grassland and woodland, dominated by magnificent wild olive and karee trees. The Garden covers 70 hectares, and is home to about 400 species of plants, mainly from the Free State, Northern Cape and Lesotho.

Karoo Desert National Botanical Garden: is totally unique in that it is the only truly succulent garden in the southern hemisphere and on the African continent. It cultivates and displays a wide variety of desert and semi-desert plants and is also home to a large succulent collection. The Garden boasts about 400 naturally occurring species, and is also a haven for rare and endangered plants, with over 300 species being protected and propagated.

KwaZulu-Natal National Botanical Garden: This garden specialises in the conservation of plants from the eastern grasslands region of South Africa, and of rare and endangered species from elsewhere. The focus of the Garden is to collect, display and promote the conservation of plants of the eastern grasslands, in particular the genera Clivia, Gerbera, Kniphofia and Watsonia.

Pretoria National Botanical Garden: This 76 hectare urban oasis is home to the Head Office of SANBI. A 35 m high quartzite outcrop divides the Garden in two sections. Its frosty south-facing section and the north-facing, warmer section present two different worlds to the visitor and botanist. Fifty hectares of the total area is devoted to developed garden, using almost exclusively South African plants. All the flowering plant species to be seen, including 50% of the country’s tree species, make this Garden a botanical tapestry.

Our history  at the Chelsea Flower Show

Initially an image-building initiative of the Department of Foreign Affairs, the immeasurable value of this event as a magnet for tourism has increased dramatically since the dawn of the New South Africa, in spite of the termination of government funding in 1995 in favour of other diplomatic expansion programmes. South Africa’s participation has been sponsored by various corporate entities since then to promote the country as a prime ecotourism destination and showcase one of the world’s richest and most diverse floral kingdoms.

The South African Department of Foreign Affairs (Cultural Affairs, Bureau of Information) appointed a British floral designer, Pam Simcock, in 1976, to create the ‘South Africa’ exhibit on behalf of Kirstenbosch.

By 1993 the exhibit had been awarded 17 Gold Medals and also won the Wilkinson Sword trophy for the ‘Best Overseas Exhibit’ for the four consecutive years that the award was made (1981 – 1984). The flowers, some of which were donated by various growers, were sourced and dispatched from Kirstenbosch to the South African Embassy in London each year. The National Botanical Gardens of South Africa (later the National Botanical Institute, and presently the South African National Biodiversity Institute [SANBI]) also sent a team of staff members to Chelsea every year to man the exhibit during the show week.

Since 1994 the exhibit has been sponsored by various South African businesses and banks, and more recently Kirstenbosch has raised funds by staging special Chelsea benefit concerts at the Garden. The design and construction has been undertaken by a core team from South Africa comprising David Davidson and Raymond Hudson as designers and a rotational group of SANBI staff members, assisted by an enthusiastic group of volunteers, from South Africa and abroad.

The design concept for the exhibit also changed at this juncture. It was decided to create landscaped exhibits that attempted to create a ‘sense of place’ and convey some idea of the actual geographical context reproduced in the displays, as well as endeavouring to answer some of the frequently asked questions about the plants, their growth forms, natural habitat and locality.

David Davidson and Raymond Hudson have been responsible for designing and creating the Kirstenbosch-South Africa exhibit for the RHS Chelsea Flower Show for 22 consecutive years, together with a small core team and an enthusiastic crew of volunteers. During this time the exhibit has garnered 16 RHS Gold Medals (bringing the total since 1976 to 33), as well as the Anthony Huxley Trophy (1995) and the Lawrence Medal for the best floral exhibit shown to the RHS in 2006. The exhibit was also the first recipient of the RHS President’s Most Creative Award, introduced at Chelsea in 2008.

Plants and art have always been David’s greatest passion, although he began his professional career in psychology and clinical social work. He later headed the Graphic Services Unit at the National Biodiversity Institute (Kirstenbosch) for 17 years – a role that included show design.

His current full-time occupation is as a graphic designer and scenic artist. He has also created floral exhibits in other parts of the world including Palmengarten, Germany; the Royal Flora Expo in Thailand; the Singapore Garden Festival and the Gardening World Cup in Nagasaki, Japan.

Ray’s career in landscaping includes the design and management of numerous large estates and landscaping projects for Keith Kirsten Horticulture International such as the spectacular Cape wine estates of Delaire and Cavalli, whilst his speciality is domestic and small garden design.