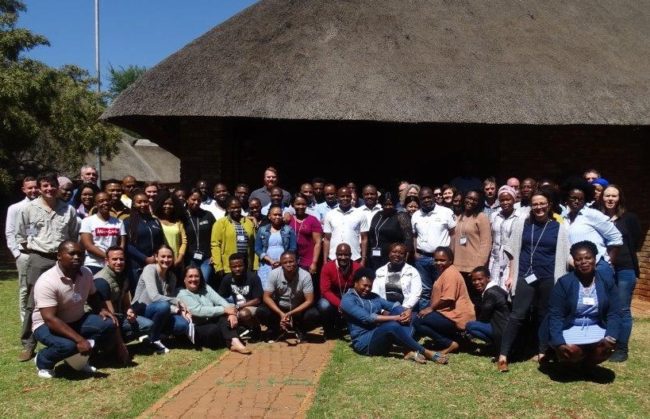 Over the last few months two capacity building sessions were provided to the Biodiversity Stewardship community of practice, aimed at enhancing capacity to undertake biodiversity stewardship on communal land specifically. This training is the first of its kind in South Africa.  On 21 and 22 August 2019, the Queen Elizabeth Park Theatre at the Ezemvelo KZN Wildlife Head Offices in Pietermaritzburg, Kwazulu Natal was the venue for the first round of the capacity building sessions. The second session took place at SANBI’s Pretoria National Botanical Garden, on 3 and 4 October 2019.

Mpho Gumula, SANBI’s Land Reform and Biodiversity Stewardship Officer opened both events and welcomed attendees to the capacity building sessions.  In welcoming the participants Mpho stated that “as SANBI we aspire to create inclusive spaces that bring diverse people together to contribute their skills and talents to strengthen our communities of practice”.

The capacity building workshops were each implemented over a period of two days in which four sessions were covered on each day.  Day one focus sessions included community conservation related issues, building relationships with the community, introduction to and processes of biodiversity stewardship over communal land and addressing legal risks. While the sessions on the second day of the capacity building workshops focused on protected areas planning, benefits of biodiversity stewardship on communal land and a very interactive session focusing on various case studies.

In its mission to reinvigorate the Land Reform and Biodiversity Stewardship Initiative, SANBI and its partners are expanding their footprint to include communal land sites with high biodiversity value into their land reform areas of work.

For more information and training material please contact Mpho Gumula on 012 853 5120 or M.Gumula@sanbi.org.za