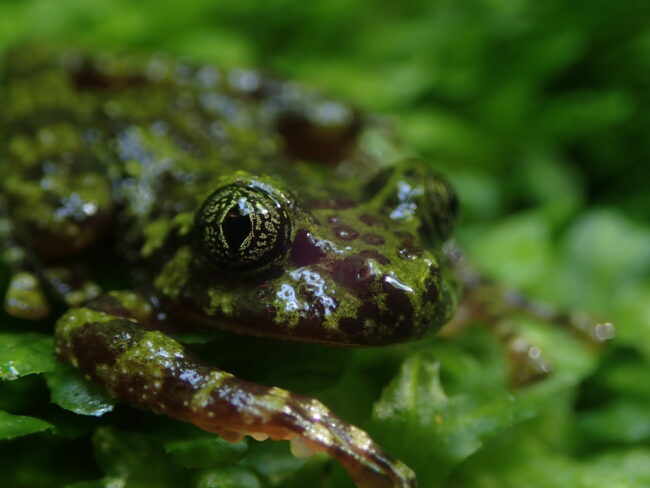 An evening earmarked towards uncovering the importance of the Table Mountain Ghost Frog attracted some new and familiar faces who came together and celebrated the debut screening of documentary film, Ghosts of Table Mountain at Jack Black’s Taproom on 12 September 2022.

The educational film highlights the research and conservation work on Table Mountain’s perennial streams, and stems from a multistakeholder project ‘The freshwater ecosystems of Table Mountain’, which was established by SANBI scientists – Krystal Tolley with support from Jessica da Silva and Colleen Seymour. 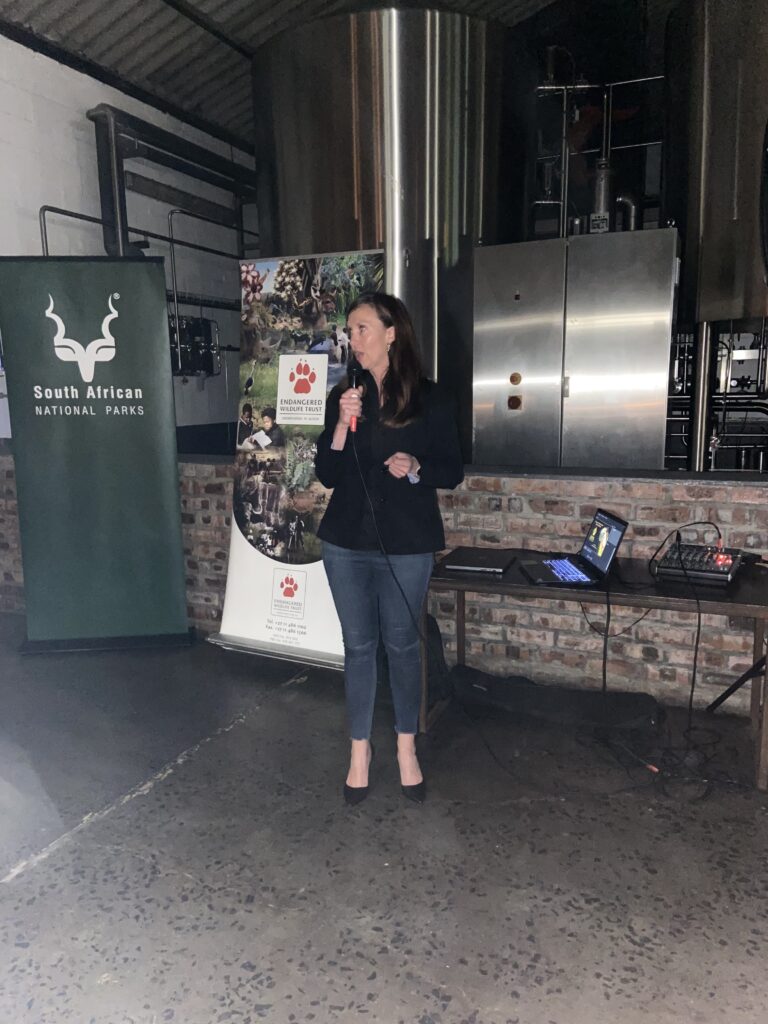 Dr Jeanne Tarrant from the Endangered Wildlife Trust (EWT) talking about the journey of amphibians and EWT’s conservation strategy and interventions that guide their work across South Africa.

The project was developed by SANBI and coordinated in partnership with the Endangered Wildlife Trust (EWT). Key collaborators also include South African National Parks (SANParks), University of Cape Town and Freshwater Research Centre. The project is funded by the Table Mountain Fund and The Mohamed bin Zayed Species Conservation Fund, and this pioneering grant unlocked the opportunity to implement conservation techniques that will play a role in safeguarding the Critically Endangered Table Mountain Ghost Frog species.

‘The aim of this project is to implement research-based conservation actions that will ensure the survival and restoration of these critical habitats and safeguard the species that rely on them,’ says Joshua Weeber who is a Table Mountain field officer in the EWT’s Threatened Amphibian Programme and leads the Table Mountain Freshwater Ecosystems Project. 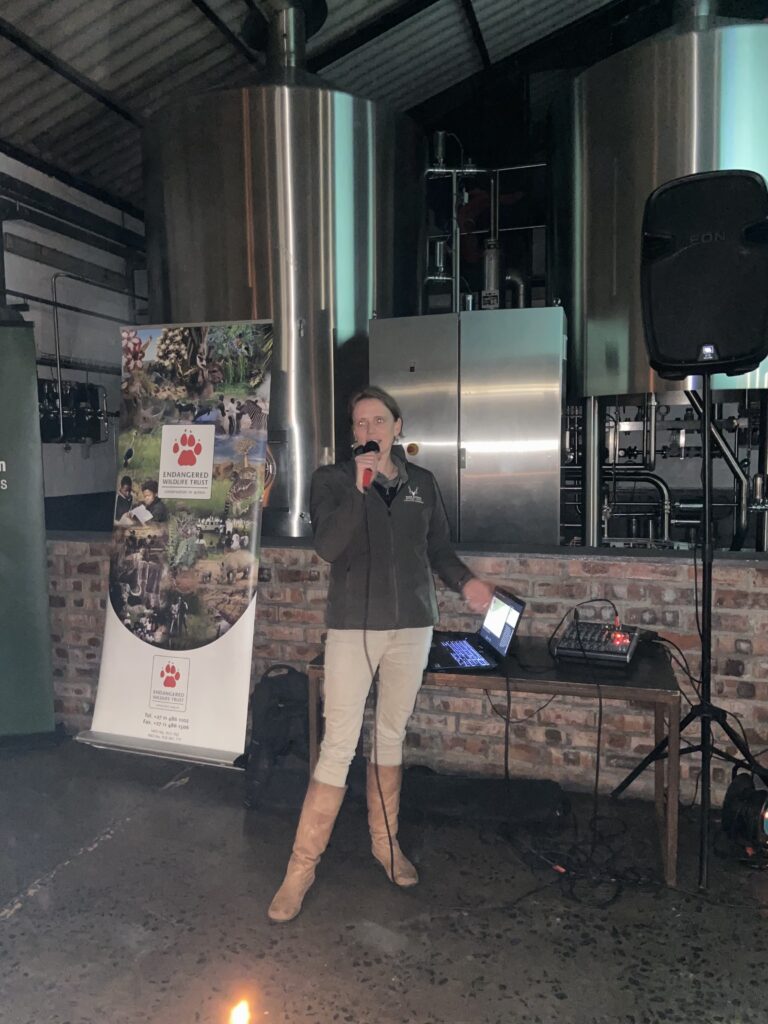 Cast members and characters who convey the Ghost Frog’s story on its behalf  involve scientists Krystal Tolley, Jeanne Tarrant, Ruth-Mary Fisher and Weeber. The film is a story of biodiversity conservation, collaboration and hope. And in fewer than fifteen minutes, the mystical tale about the Ghost Frog inspires fresh appreciation of Table Mountain whilst revealing how a delicate amphibian species continues to face on going threat and decline in its conservation status within a dynamic ecosystem said to be its natural home.

Intentional in its message and entrancing to a captive audience throughout the evening, the brief motion picture also places emphasis of additional freshwater creatures who co-habit a moistened wet home in company of the Ghost Frog, and continues to provide awareness into all of their precious lives as rocky residents. 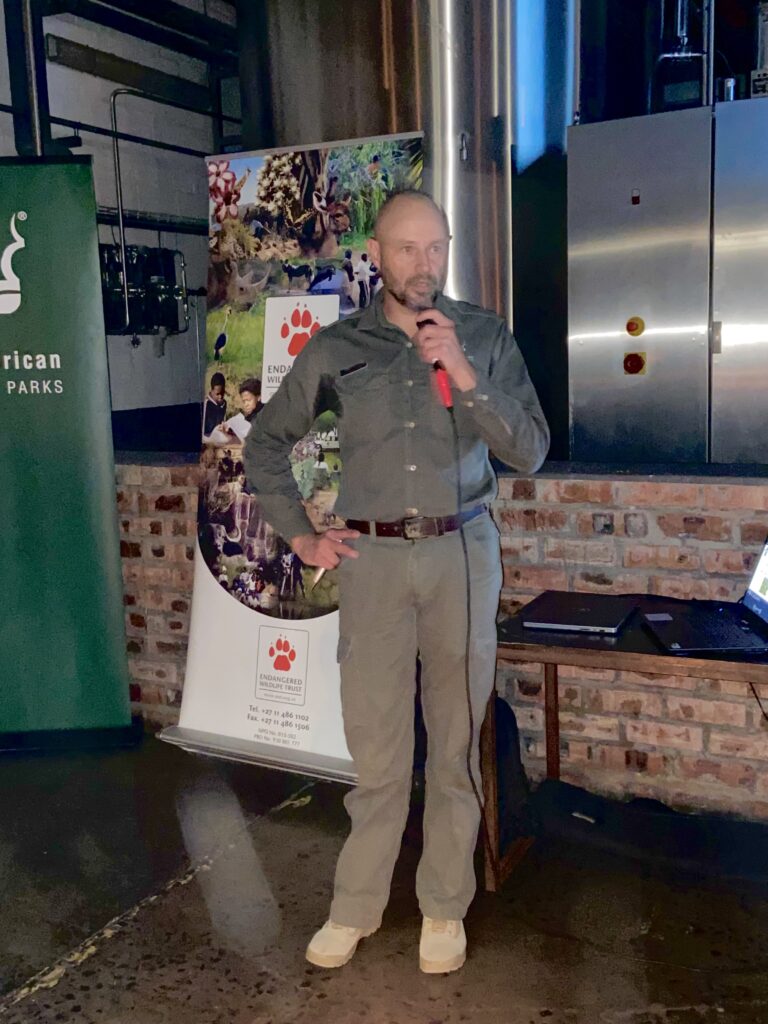 Mr Dave Kruger who is part of the SANParks Honorary Rangers and shared updates about the Alien Clearing Collaboration Project at the Table Mountain National Park.

Adapted for the mountain, living a secret life, and the flush is critical

‘This unique amphibian is only found in eight streams on Table Mountain and nowhere else in the world’ says Weeber. The intricate freshwater system on the mountain remains a magical factor to marvel at throughout the viewing, and this is because it becomes apparent that the streams not only need to be following at all times but that the stream quality and the stream flow affect the Ghost Frog’s survival rates and / or decline. The adult frogs lay their eggs in the rocky pools. Once the tadpoles emerge, it can take over a year for them to metamorphose into frogs. Their unique sucker mouth helps them cling to the underside of boulders during winter torrents. However, the same mouths make tadpoles heavily reliant on clear, sediment-free pools, and are therefore vulnerable to disturbance.

The Ghost Frog is found in a formal protected area – Table Mountain National Park of SANParks and it has vanished from two streams, and now most of the eight remaining streams are under threat.

According to the National Biodiversity Assessment (NBA) 2018, more than 85% of threatened birds, plants, freshwater fishes, amphibians, mammals and butterflies are under-protected.

Frogs and toads, for example, are some of the most commonly found creatures on the International Union for Conservation of Nature (IUCN) Red List of critically endangered species (Steyn 2018). Having been last assessed just over six years ago, the frog is listed as Critically Endangered whilst the current population trend of the Ghost Frog indicates that it is decreasing in the wild, is facing threat from agriculture, aquaculture, human intrusions and disturbances, natural system modifications, as well as invasive and other problematic species, genes and diseases the IUCN Red List states.

The frogs can bounce back with sustainable interventions

Freshwater ecosystems are not only essential for our everyday survival, they are also places for rituals and enjoyment. People are part of the natural system setting, albeit as users, managers and protectors of Table Mountain. And this is often what poses as a challenge to conservation efforts as there are members of the public who use the mountain and enjoy all the various ecosystem services it offers, and others who have a role to play in ensuring it is protected.

Species contracting their geographic ranges, are at least partly due to climate change impacts on freshwater ecosystems. Prior to screening of the film, a few talks were presented, and one of them was by Nicola van Wilgen-Breedekamp from SANParks who mentioned that the productivity cycles of species are also at risk by climate change. The Ghost Frog is unique in the fact that it has a longer tadpole phase compared to other frogs. Evidence of early impacts of climate change on species is rapidly accumulating, with 70 amphibians The message is clear that climate change impacts species and this has implications for how national parks across the country are managed. 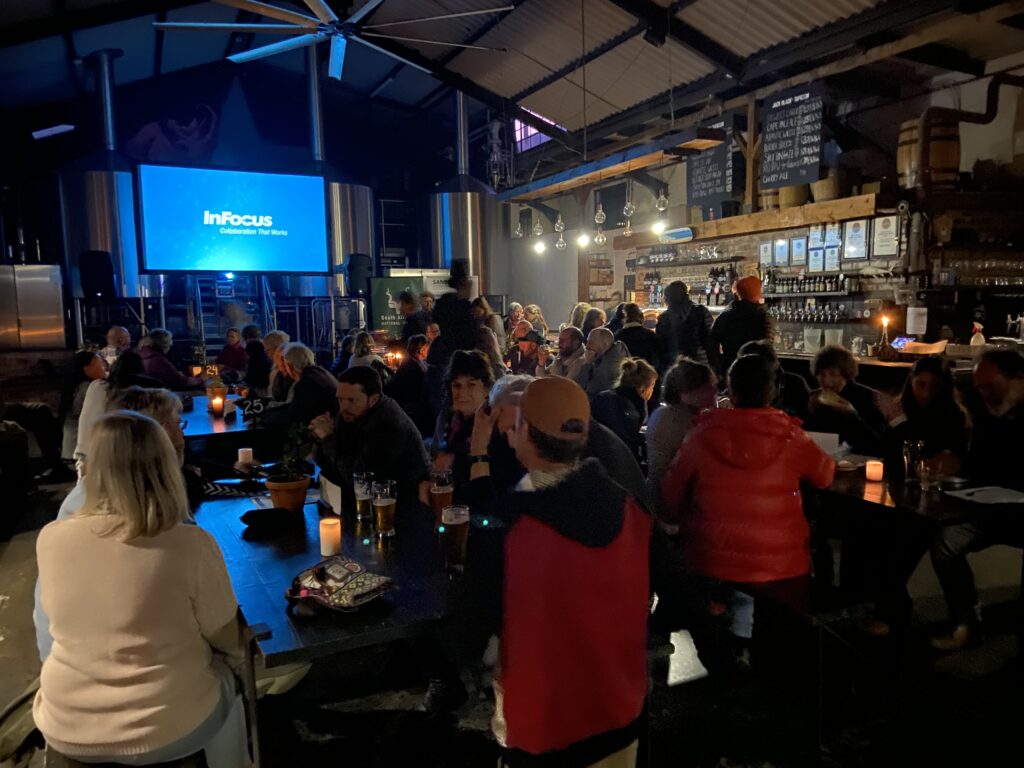 It is important to note that nearly 80% of amphibian taxa of conservation concern are impacted by invasive alien plants modifying their habitats (SANBI 2019), as the NBA 2018 also states.

Another talk during the evening elaborated on how removal clearing interventions by Working on Fire teams with the assistance of private groups have been an important source of information to address areas affecting the Ghost Frog, and this has been made possible by means of a Table Mountain National Park alien clearing collaboration project.

Water contamination, frequent forest fires and human-made construction of water storage reservoirs on the mountain have affected the frog’s habitat, and they are currently a conservation priority (Sullivan 2021). The first speaker of the evening, Dr Jeanne Tarrant shared with the audience about how amphibians have been around for over 300 million years, with over 37 400 species, and that 134 frog species are found in South Africa, of which 39 frog species are endemic to the Western Cape province.

This Fishwater Films documentary was produced by Jeremy Shelton and Otto Whitehead, and does not fall short of brilliantly calling attention to the research and conservation work being done by partners to protect Table Mountain’s perennial streams, whilst educating the public and mountain users about the conservation needs of its shared resources as an essential natural service. It becomes clear that dedicated efforts, collaboration, and successful conservation management can be done to safeguard the Ghost Frog and the freshwater ecosystem for future generations to come, coupled with ongoing monitoring efforts. The film ends with a call to action by offering tips for members of the public on ways to play a role and assist with the continued survival of the Table Mountain Ghost Frog species. 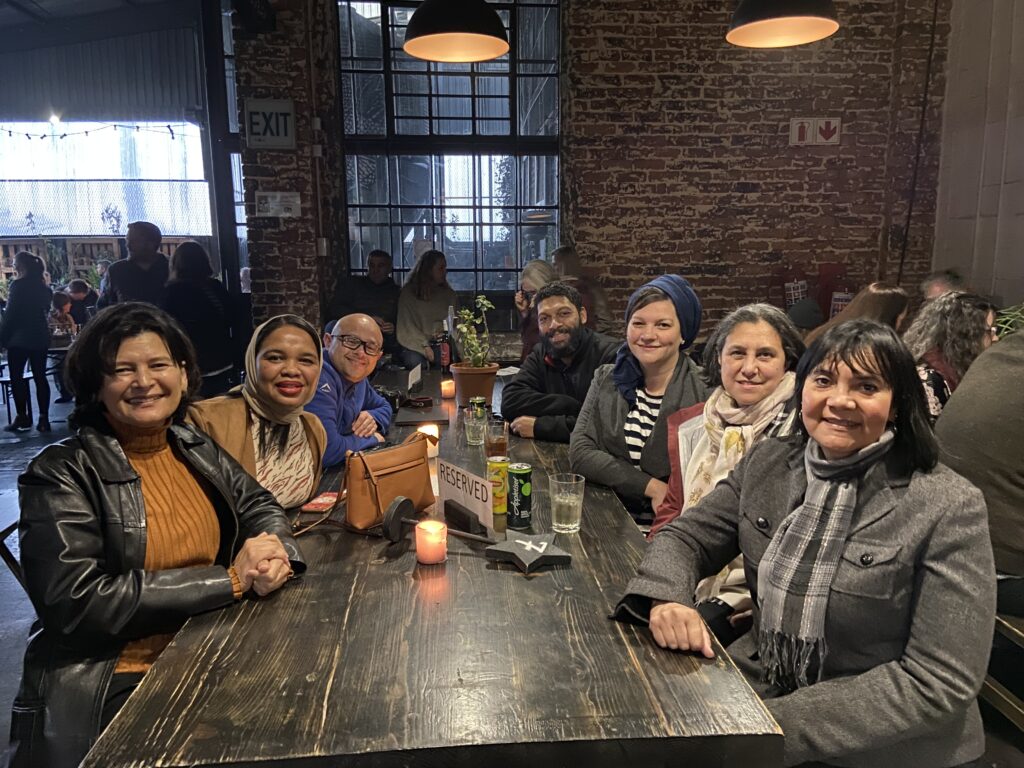 Where to view the film

With the hashtag #GhostsOfTableMountain, please like, share, subscribe the film that will be made available online and shared across the official social media pages of the project partners.

The common name, ‘ghost frog’ originates from where the genus was first recorded, namely Skeleton Gorge on the eastern slopes of Table Mountain, which is a treacherous, steep and ghostly ravine. The entire genus is endemic to South Africa, Lesotho and Swaziland.