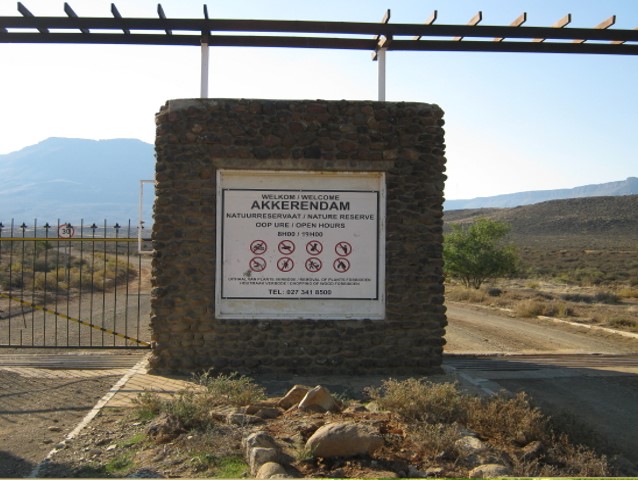 The Akkerendam Nature Reserve (AKNR) is 2 750 hectares in size and forms part of the water catchment area for the Karoo town of Calvinia. Currently, the reserve stretches from the edge of the plateau of the Hantam Mountain, down its steep slopes and runs onto a section of undulating foot slopes and flats lying just north of the town whilst expansion plans for the reserve are being considered. What makes the Hantam Mountain plateau unique is that it is well known for its endemic species. It is located within the Fynbos Biome, whilst its upper steep slopes and lower slopes of the Hantam Mountain and flats to the north of Calvinia are considered Succulent Karoo biome vegetation.

Akkerendam is the second oldest proclaimed municipal nature reserve in the Northern Cape Province, yet to date no vegetation map has been published. Following a successful application by Mandy Schumann from the Northern Cape Department of Environment and Nature Conservation (DENC), funding was received in 2013 from the Leslie Hill Succulent Karoo Trust (LHSKT) via the World Wide Fund for Nature South Africa (WWF-SA) to produce the first vegetation map of the nature reserve.

Subsequently, Dr Helga van der Merwe was able to produce a vegetation map including a classification and description of three broad plant communities and 14 subcommunities for reserve and proposed area of expansion. By producing the vegetation map the conservation value of the current reserve, as well as the proposed expansion thereof, could be assessed.

In 2016, Dr van der Merwe of the South African Environmental Observation Network (SAEON) and Honorary Research Associate at the University of Cape Town (UCT) in collaboration with Prof. Timm Hoffman of UCT, added value to the original study by assessing vegetation change over time in the reserve. Vegetation change over the past century was quantified using vegetation data collected at ‘Akkerendam’ by John Acocks between 1954 and 1956, and historical photographs taken by Pole Evans (ca. 1920).

Species lists noted by Acocks in the 1950s were sufficiently similar to the data generated during the vegetation mapping surveys in 2013, that the historical data could be incorporated into the current dataset without influencing the result of the 2013 study. Repeat photographs of the original Pole Evans images taken from the lower to upper slopes of the Hantam Mountain indicate some change in the vegetation that resulted from recent fires which occurred in the reserve. An analysis of the matched photographs suggests that the same vegetation is re-establishing following fire and that few major changes in cover and composition are evident in the reserve.

The vegetation map for the AKNR is a first. And the inclusion of the proposed expansion area into the existing AKNR will contribute to the conservation significance of the AKNR, as these areas include a host of different high altitude plateau and upper slopes, supporting diverse plant species and vegetation units. In arid regions, natural vegetation change is slow to manifest. This was supported by the additional research conducted in AKNR concluding that after nearly a century, limited vegetation change occurred in the reserve.