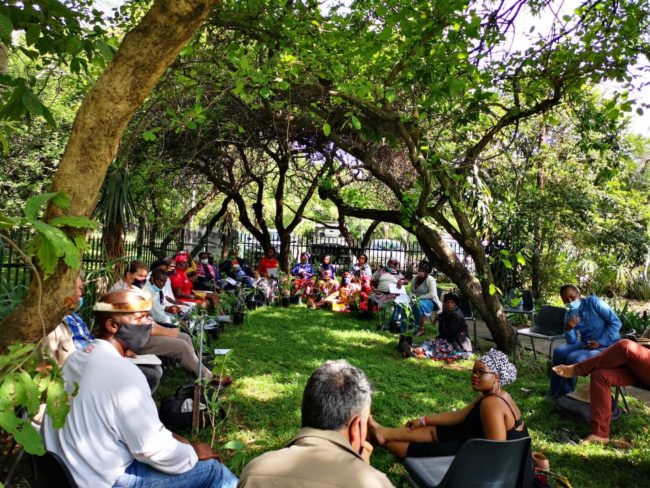 Traditional healers, conservation practitioners, muthi gatherers and law enforcement officials gathered on 26 November 2020 at the Lowveld Botanical Gardens in Mbombela, to discuss the sustainable management and use of medicinal plants. Representatives from provincial and national law enforcement, community representatives from Bushbuckridge, Mbombela, Thaba Chweu and Nkomazi municipalities were in attendance.

In response to the problem, SANBI is piloting developing a Biodiversity Management Plan for Species (BMP-S) for threated medicinal plant species in the Ehlanzeni District Municipality, Mpumalanga. This project is part of the broader Biodiversity and Land Use Project funded by the Global Environment Facility. The project is engaging with traditional healers and muthi gatherers in Ehlanzeni District Municipality, Mpumalanga to co-operatively develop Biodiversity Management Plans for six threatened medicinal plant species, to ensure conservation and sustainable use.

Priority medicinal plant species were identified based on those species whose selling price was rising as they were becoming harder to find in the wild and in markets. Plants were further prioritised based on their conservation status, population trends, distribution patterns, demand, ease of propagation and presence in Protected Areas.

Engagements between conservation practitioners, traditional healers and muthi gatherers is vital to determine the management interventions required to conserve the existing medicinal plant species and ensure availability of medicinal material for future use. The team working on the BMP-S engaged traditional healers by traveling from village to village across   Bushbuckridge, Mbombela, Nkomazi and Thaba Chweu municipalities  to reach as many healers as possible in the respective communities.

A total of 137 healers and 3 muthi gatherers were interviewed, and key representatives from each village were then invited to the workshop. Attendees had the opportunity to engage directly with law enforcement officials and conservation practitioners working both within the district and in national government.

Some of the key messages that have emerged include that: in all municipalities 90% of the healers travel long distances to collect medicine plants; the majority of healers buy medicinal material from markets and pension pay-outs and healers from three of the four municipalities cultivate medicinal plants.

Traditional healers have identified cultivating as the key conservation intervention needed to conserve species and would welcome contributing to this effort by growing plants in their home garden, should we be able to provide small seedlings. Participants also mentioned that protected areas should cultivate those species that will be difficult for communities to cultivate because of habitat differences, water and land availability.

In addition, the need to simplify and ensure practical role out of permits was also identified as a management need. Healers spoke about the victimization that they experienced when harvesting material without permits – this caused a stir during the workshop, but all was resolved through conversations with the healers, explaining the relevance of having permits and how it benefits the sustainable use of species. The workshop was very beneficial to healers as they made direct contact with officials from whom permits can be obtained in future.

As part of the development of the management plan, the team is also conducting extensive surveys of what populations of all six species remain in the wild. This work is still underway but thus far, the team discovered many populations not previously known and also now have a good sense of which populations can act as long term genetic resource banks as they occur within Protected Areas and on private land.

The team also found areas of communal land where there are still good populations of medicinal plants. The communities that have tenure over these areas require support to ensure that overharvesting by gathers from other parts of South Africa does not take place.

The management plan will be finalised in 2021 and will be made available for comment. If you would like to know more about this work or would like to contribute to the management actions, please contact: Domitilla Raimondo d. raimondo@sanbi.org.za