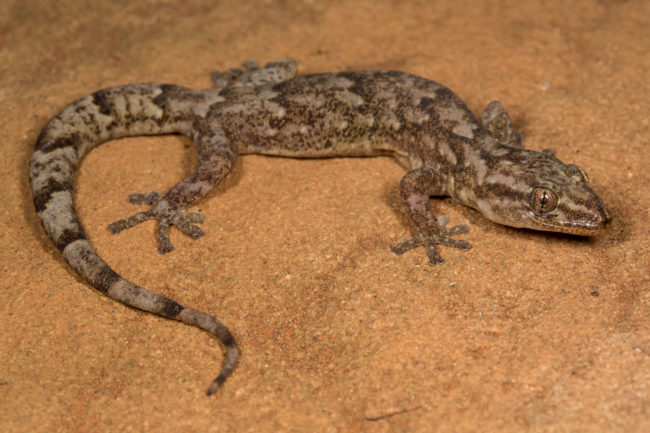 A recent molecular genetic study has revealed hidden cryptic species within a forest gecko from the east coast of South Africa – the Pondo flat gecko.

A species complex is a group of closely related organisms that are very similar to the point that the boundaries between them are often unclear.

“The species complex started diversifying during the late Miocene which suggests that forest fragmentation related to climatic shifts drove diversification in the group,” Busschau told the FBIP.

According to Busschau forest fragmentation since the late Miocene may have driven diversification in other forest-living species in the region and therefore these forests possibly harbour significantly higher levels of diversity than currently recognised.

The study, published in the Molecular Phylogenetics and Evolution journal, formed part of the Eastern Cape Forest project – one of the Large Integrated Projects funded by the Foundational Biodiversity Information Programme (FBIP).

Busschau’s findings show that the individual cryptic lineages in the A. pondolia complex have much smaller ranges than the species name they are classified under.

In addition most of A. pondolia’s coastal forest habitat is threatened by increased urban development, making these species a high priority in terms of conservation.

“If other forest-living species show similar patterns to the Pondo flat gecko, as I expect, these findings highlight the importance of protecting forest habitats and maintaining forest corridors to conserve the high diversity in the east coast forests of South Africa,” he said.

Geckos play an important role in maintaining an ecological balance by keeping insect populations in check. They are also food to many birds, mammals and other reptiles. As such geckos represent an important link in the food chain.

Busschau warns that removing geckos from an ecosystem may have a cascade of consequences both lower and higher up in the food chain.

Consequently, sensitive species, such as Afroedura sp. are important bioindicators of biodiversity and ecosystem health, particularly in disturbed habitats where they are often displaced by the invasive tropical house geckos (Hemidactylus mabouia).

Busschau’s work has identified possible new species within the A. pondolia complex based largely on genetic data. His morphological analyses identified some differences among the candidate species but in order for researchers to formally describe the species they will have to take a closer look for “fixed morphological differences”.