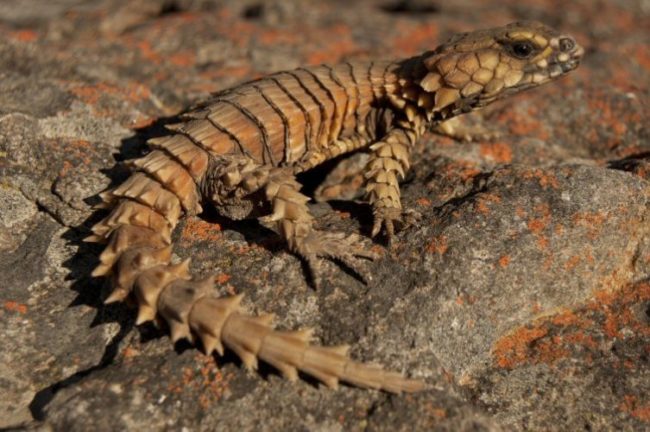 The Armadillo Girdled Lizard is endemic to the mountains and rocky hills of the Succulent Karoo veld of the western parts of South Africa, specifically from the Orange River in the Northern Cape Province southwards to north of Porterville and eastwards to the west of Laingsburg in the Western Cape Province.

Its scientific name, Ouroborus cataphractus, is derived from its habit of rolling into a ball and biting its tail like the mythical Ouroboros found in most ancient cultures. The Armadillo Girdled Lizard does this to protect its soft underbelly when it feels threatened. The Ouroboros eats its own tail as a symbol of sustaining life in an eternal cycle of renewal.

Because they live in family groups and are relatively easy to catch, the international illegal reptile pet trade is a growing threat. The species is protected under the Nature Conservation Ordinance of the Western Cape Province and is on Schedule II of the Convention on the International Trade in Endangered Species of Wild Fauna and Flora (CITES).

Teamwork by CapeNature Conservation Services, the Biodiversity Crime Unit, the Nuwerus, Lutzville and Malmesbury police officers of the Stock Theft and Endangered Species Unit, and the Organised Crime office of the National Prosecuting Authority has made substantial convictions possible.

Within the past two years, two Japanese citizens have been arrested, fined and sentenced after being apprehended by the police. Through investigations it was discovered that there were plans to sell the species in Japan where they are highly sought after as pets.

Although the International Union for Conservation of Nature (IUCN) Red List lists the species as of Least Concern, the Armadillo Girdled Lizard faces threats of hunting and trapping by terrestrial animals, as well as climate change and severe weather. The species is included in international legislation to ensure its conservation protection.

Armadillo Girdled Lizards can stay in their defensive Ouroboros position for up to an hour when they are in danger and cannot reach a crevice or rock crack to hide in. These relatively slow-moving, rock-dwelling lizards are very shy and quick to hide when approached. They shelter in the holes and crevices of rock formations. They favour rocky areas as close as possible to termite mounds, as termites are an important food source. They often have to travel distances of between four and twenty meters to termite mounds, which makes them vulnerable to poachers.

They are social animals and form family groups of up to 60 individuals in one crevice. Once a year in autumn, the female gives live birth to one or two babies. It is one of the few lizards that does not lay eggs. They can reach an average total length of about 150–200 mm.