With a flora dominated by succulents and geophytes, Namaqualand is one of the planet’s richest botanical treasures. In this semi-arid region, an exceptionally diverse range of succulents have adapted to survive the dry climatic conditions by ingeniously storing water in their tissues, whilst geophyte plants spend the dry season buried underground.

Namaqualand is defined by its semi-arid climate and strictly winter rainfall system, and as such is restricted to the western part of South Africa, from Vanrhynsdorp in the south to the Orange River Mouth in the North. It is home to over 3 000 plant species among which are many of the world’s most popular succulents and geophytes, including Conophytum, Aloe, Adromischus, Crassula, Pelargonium, Gethyllis, Bulbine, Massonia, Eriospermum as well as many more astonishing and beloved genera.

A totally unique characteristic of this flora is the abundance of succulent dwarf species, in contrast to other deserts, which is partly explained by the predictability of winter rains and the rarity of extreme drought events, enabling even the smallest succulents (e.g. Diplosoma luckhoffii – Figure 1) to survive. 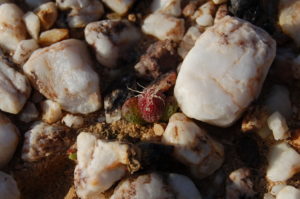 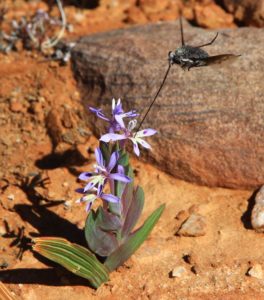 In 2015, I set out to study Namaqualand intensely, over a five-month period of fieldwork, camping my way through its vast expanses. Since then, I have repeated the experience annually, now totalling 23 months of rough fieldwork and visiting nearly 1 000 field sites. My main mission was to sort out the various mysteries about the long-tongued flies (belonging to the Nemestrinidae and Tabanidae Diptera families) of Namaqualand which are important pollinators of nearly 250 plant species in the greater Cape Floristic Region.

These extraordinary flies (Figure 2), several of which remain undescribed, are the sole pollinators of many plant species including Pelargonium, Babiana, Lapeirousia, Romulea, Hesperantha, Tritonia and Acanthopsis. The importance of the long-tongued fly is the subject of my PhD study at Stellenbosch University.

What I didn’t know when I started fieldwork in Namaqualand in 2015, is that I would never see it as green and healthy as it then was (Figure 3). In 2015 the region was affected by a drought. In 2017 the overall rainfall barely reached 30% of the annual average (Figure 4). In 2019, good winter rains in the Cape area lead to dams filling up to 83 % (situation in mid-November 2019), setting a record high since 2014. Despite this, most of the cold fronts hitting the Cape have not reached far north, most missed Namaqualand, resulting in an ever-worsening situation. 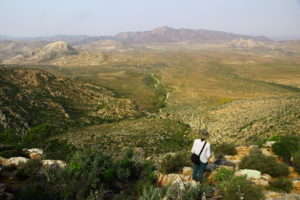 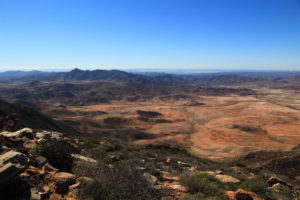 Currently the total plant biomass of the Richtersveld and many other Succulent Karoo geographic priority areas, such as parts of the western Bushmanland Inselbergs and the Knersvlakte are less than half of what it was in 2015 (Figure 5), with dramatic consequences on soil erosion and desertification. These processes were worsened by the continued grazing (Figure 6) of non-indigenous animals such as sheep and goats, the lack of suitable planning and help to shepherds and farmers.

To this day the greatest threat to the Namaqualand vegetation and plant biodiversity is the combination of unsustainable farming coupled with the onset of climate change, of which the current drought is a symptom. These threats far exceed any other threat and this is what conservation programs should focus on. Putting these dire facts aside, Namaqualand still remains a source of wonder and botanical inspiration – which is evident through my recount of the story of the discovery of a very attractive new Tylecodon, or ‘botterboompie’. Fig 5: destroyed grit pan on private land in the Kamiesberge leading to the local loss of thousands of Conophytum pagae and Othonna retrorsa 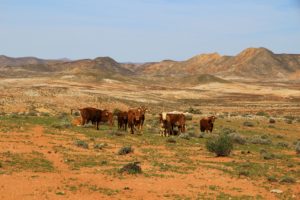 Fig 6: The Richtersveld World Heritage Site is already desertified to a very serious extent, and little hope is foreseen for the future in the lack of proper planning.

Below the Verreaux’s Eagle nest, lies a new ‘botterboompie’

High vermilion cliffs attracted my curiosity alongside a remote track of northern Namaqualand. That day in November 2017 was blazing hot, yet I couldn’t resist inspecting these enticing vertical slabs of sandstone. What a surprise! Below the nests of Verreaux’s Eagles, who took flight upon seeing me approach, was a Tylecodon, a botanical genus that I admire for its diversity of growth forms, varying from Tylecodon paniculatus, a sumptuous shrub shaped like a miniature baobab, to miniature species like T. pusillus, which are extremely difficult to spot among quartz pebbles.

It was with excitement that I realised what I had just stumbled upon, a new ‘botterboompie’. Clinging to a cliff (Figure 7), the downy leaves are covered with a cross-linked network of protruding veins in the manner of those of T. singularis, but slightly less markedly so. The short stem, adorned with a few phyllopods*, rests on a thickened tuber firmly anchored in a rock crevice.

This species blooms in February, displaying white petals streaked with pink-mauve. A description of this species, named Tylecodon ectypus and co-written with Ernst van Jaarsveld, has been accepted in the popular Journal of the Cactus and Succulent Society of America. Being the most spectacular attribute of this species, the reticulated bulging veins give the species its Latin epithet ectypus (meaning salient, protruding) (Figure 8).

*FOOTNOTE: A phyllopod is a little-known botanical term referring to the base of the petioles in Tylecodons, which    harden after the rest of the leaf falls off. 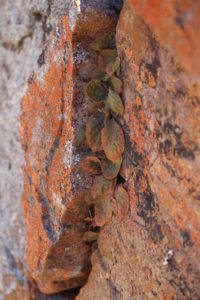 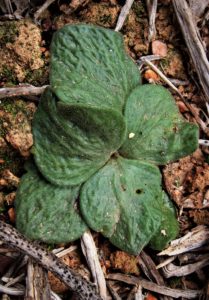 A new book for Namaqualand botany

Inspired by my PhD research, I thought that the succulents and geophytes of Namaqualand deserved a book with attractive photographs and popular science stories in order to praise the beauty of this semi-desert. Accessible popular science can inspire one’s interest for plants, through captivating anecdotes about plant adaptations to survive and reproduce. This is what I did with the book that I recently self-published: Secrets of Namaqualand Succulents (Figure 9). 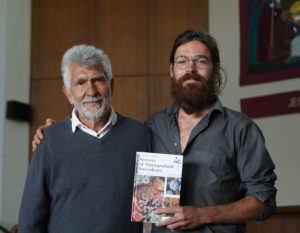 Boasting more than 1 100 exclusive habitat photographs representing over 710 Namaqualand plant species, it is intended for a broad readership. It aims to reveal the secrets of this extraordinary flora by presenting up-to-date scientific knowledge through a series of engaging narratives, anecdotes and detailed observations. A fusion of refined photography, botanical field notes and environmental ecology, this book is a remarkable source of information and wonder for specialist collectors and natural history enthusiasts alike.

It is in hard cover format, consists of 352 pages, 24 cm X 17 cm in size, 40 000 word count and illustrates succulent and geophyte plant species. The book is of excellent printing quality, printed in France in association with the skilled graphic designer Solie Morin, thanks to over 700 pre-subscribers from 41 different countries.

This publication is the culmination of five years of field-based research and botanical exploration, a most painstaking effort to document the Namaqualand flora. With a budget to stretch over 500 days, conditions proved to be rather rudimentary but generated a wealth of data through photographs and field notes.

The book is available at R590 retail price. Contact florent.grenier@normalesup.org or WhatsApp +33676481030. Shipping is available from Cape Town and Stellenbosch from various courier companies.

Description/How to recognize a…….. An adult Drosophila melanogaster (common fruit fly) is yellow-brown (tan) in colour, and is only about […]