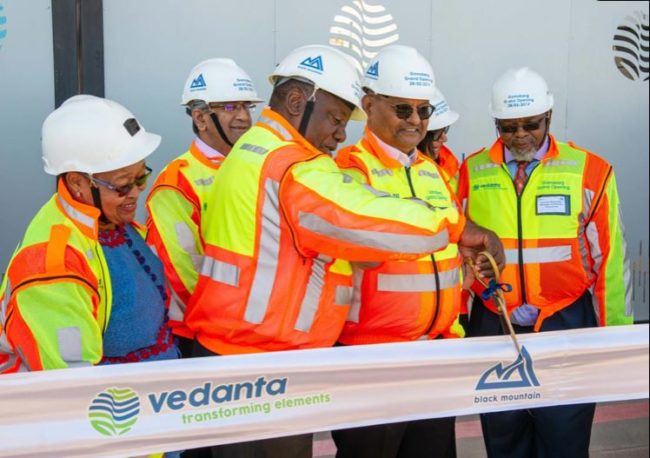 On the 4th of March 2019, President Cyril Ramaphosa officially opened Vedanta Zinc International’s (VZI) Gamsberg mine outside Aggeneys, a mining town established in 1976 on a farm of that name, situated between Pofadder and Springbok in the Northern Cape. Gamsberg mine is located in the ecologically sensitive Succulent Karoo Biome, which is one of the world’s 35 Biodiversity Hotspots.

The Gamsberg zinc resource, though discovered more than 40 years ago, had been held undeveloped in the portfolios of various South African mining companies until Vedanta acquired it in 2011, as part of the Black Mountain Mining complex. Vedanta gave the project the go-ahead in 2014, and the first blast occurred in mid-2015, just eight months later.

Delivering the keynote address, President Cyril Ramaphosa said: ‘The Vedanta Gamsberg project is an important step in our shared journey to revive our mining industry. It confirms our view that with an effective regulatory framework, improved collaboration between all stakeholders and sustained investment, mining has the potential to be a sunrise industry. We welcome this substantial investment by Vedanta, which not only deepens South Africa’s relationship with India, but also signals Vedanta’s confidence in the future of South Africa’s mining industry.’

Vedanta Zinc International’s biodiversity action plan includes the preservation of plants and seeds for post-mining replanting, and a biodiversity offset programme involving the purchase of 12 500 ha of land. Where significant impacts to biodiversity are identified, offset planning becomes a key component during the final stages of an Ecological Impact Assessment (EIA) process. Biodiversity offsets are seen as one possible method of mitigating the current trends in biodiversity and ecosystem services loss in the country.

Gamsberg has a reserve and resource of more than 214 Metric tonnes (Mt) with a grade of between 6 per cent and 6.5 per cent zinc and an estimated life of mine (LoM) of 30+ years. Phase 1 of Gamsberg at the end of February 2019, represents a US$400 million investment by Vedanta in South Africa. This phase has a life of mine of 13 years and will see 4 Metric tonnes per annum (MTPA) of ore produced from the open pit and 250 000 tpa of concentrate from its concentrator plant.