Skip to content
Home » News Room » The Upper Breede: a ‘microcosm’ of what can be achieved 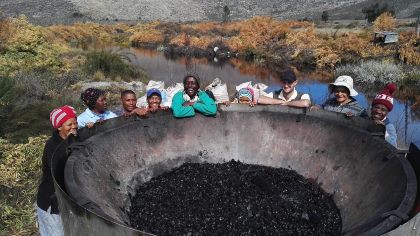 It’s not only the environment that benefits when farmers take ownership of their natural resources. Agricultural landscapes also improve which, in turn, provides economic benefits.

That’s why LandCare, a division of the Western Cape Department of Agriculture, works to encourage farming communities to care for their natural resources.

For members of the Wolseley Water Users Association (WWUA), consisting of around 50 landowners in the Cape Winelands, spending money and time improving the Breede River system by working with LandCare has proven to be a smart decision.

Their pro-active approach kicked off in 2013. Then, working closely with LandCare in the Cape Winelands and the Breede-Gouritz Catchment Management Agency (BGCMA), they started removing invasive trees from a 30 km riparian zone. They also rehabilitated the heavily eroded Breede River banks.

The work continued for two years. And the benefits were unexpected. Aside from more water becoming available as the invasive plants were removed, the results were most notable during a wildfire. In January 2015, a fire spread rapidly around Wolseley through the mountain ranges. Once the blaze had been extinguished, it became clear that farms where invasive plants had been removed were impacted far less than others.

According to Elkerine Rossouw, Water Use Specialist at the BGCMA, the WWUA chose to be hands-on from the outset. ‘They sought inclusivity to have a say in how one manages the resource. And we all wanted a sustainable and ongoing project.’

When the LandCare/BGCMA project ended in 2015, WWF-South Africa saw an opportunity to ensure that farmers continue the work themselves. Crucially, they convinced South African retailer, Woolworths, and other partners, to also become involved.

That led to the appointment of an alien clearing coordinator, Ryno Pienaar, in 2017 in a new position funded by Woolworths and partners. This is the first such partnership of its kind. ‘These projects must be driven by landowners. I’m not a government official. I work for the landowners,’ said Pienaar.

Pienaar now oversees five permanently employed alien clearing teams funded with support from the Western Cape Department of Environmental Affairs and Development Planning (DEADP). Working closely with LandCare, it means nine permanent teams, consisting of around 120 individuals, are actively clearing and rehabilitating the Breede River and its tributaries around Wolseley and Ceres.

The Titus River has been a focus area for Pienaar and his teams. This small river flows through the mountains around Ceres. The Breede River has its origins where the Titus and Dwars rivers come together, below a waterfall known as the coffee pot.

Farmers working with Pienaar approached Cillie to get involved. And he didn’t hesitate. Now 45 hectares have been cleared on his property and a key wetland is once again functioning as it should: providing water even during the current drought.

‘Water is becoming a scarce commodity. The seasons are changing and climate change is impacting. Water sources will have to be protected,’ said Cillie.

While the drought impacts on production, Cillie says jobs are being lost in the agricultural sector as a result. He employs 35 people on a permanent basis, and supports an additional 60 staff when the fruit is ready to be picked. But as a result of the dry conditions, he has reduced his fruit orchard by nearly 10%.

Cillie therefore understands the importance of removing invasive species, which use up to six times more water than indigenous trees. ‘This invasive alien thing is getting out of hand. They grow so fast. So there had to come a time that I just started to clear.’

Already more than 400 hectares have been cleared since Pienaar was appointed to support farmers in the Wolseley and Ceres regions. The teams have also focused on rehabilitating the riverbanks, using indigenous plants and trees from Kluitjieskraal Nursery. With a recently acquired chipper unit, the teams now chip the alien biomass, and use the mulch to reduce evaporation in the fruit orchards.

‘Sustainable resource management means you should ask: can I keep doing what I’m doing, without causing irreparable harm? With what we’re doing – the amount of water you save when you clear a stand of alien vegetation, chip the biomass and put the biomass on the orchard – it just makes complete sense,’’ said Pienaar.

Each farmer in the WWUA where alien clearing takes place provides R22 000 co-funding per year. On top of that, the WWUA sources R100 000 extra to fund additional clearing activities. The LandCare team now hopes landowners will financially support Pienaar’s position into the future once the Woolworths funding ends.

The WWUA partnership is now bringing about positive changes elsewhere. Jason Mingo of DEADP said, ‘The Upper Breede is a case study, a microcosm of what can be achieved. It started with stakeholder engagement led by LandCare, then a broader government perspective was introduced to improve the state of catchments. Now we have seven years (of experience), so there’s no need to start again.’

The benefits of the project outweigh the improved ecosystem functioning and the jobs that have been created. For partners, like the LandCare team, it’s about encouraging even more farmers to get excited and involved.

Pienaar said, ‘The farmers are getting on board. That’s the bigger thing. Farmer’s farm. So they welcome someone else helping them to monitor the clearing, provide professional project management, and share scientific knowledge on how to do the work best.’

Cillie agreed, ‘I’m just so pleased that LandCare could encourage other farmers to get involved. The success of the project now depends on how we work together, and on the follow-up.’