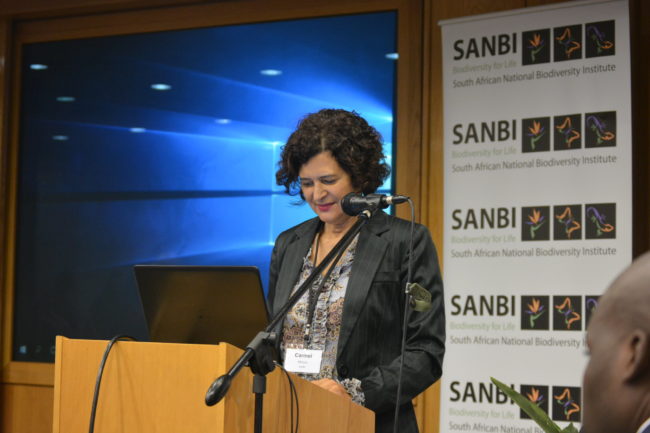 We acknowledge and value the presence of AMAKHOSI, indunas, councillors, CPAs and Trust members in our midst.

This is the 7th national Land Reform and Biodiversity Stewardship gathering, the first event was held in KZN, in 2009 with 35 people in attendance. Today we are more than 180 people who are involved in working with communities who have a close relationship to biodiversity.

SANBI is happy to be partnering with the Department of Environment, Forestry and Fisheries (DEFF), Department of Agriculture, Land Reform and Rural Development, Ezemvelo KZN Wildlife as well as non–government organisations to bring us all together for this week.

We welcome our Biodiversity Economy colleagues and People and Parks colleagues in DEFF, and look forward to how we can build a cohesive programme of work together in stimulating rural development.

The most important people here today are however our community members who have come from far and wide to be in this room, thank you for your attendance and participation here today.

We have representation from all levels of government and most of our provinces, some municipalities and civil society interested or involved in supporting our communities. The people here have worked hard to keep this important work going on the ground and the out pouring of interest in this room shows how close to our heart the work is.

Finally, we thank the Munyawana Conservancy and Phinda Game Reserve for hosting us during the site visit yesterday. We have learnt a lot from them and we hope that lessons learnt from the site visit is something which other communities would also replicate in the future.

Biodiversity stewardship is an approach to securing land in biodiversity priority areas through entering into voluntary agreements with private and communal landowners. These agreements are led by conservation authorities and with conservation NGOs who play a supportive role.

The Land Reform and Biodiversity Stewardship Initiative was started 2009 as a conservation and developmental initiative with the overarching objective being to stimulate socio-economic development in land reform and community projects that overlap with areas of critical biodiversity.

Our time this week will take us closer to that vision by engaging in the following:

In the last decade, Biodiversity Stewardship has proven to be the most cost effective way to expand our protected area estate.

But stewardship is more than a protected area expansion tool, it provides the opportunity for land owners and land users to optimise the benefits they receive from biodiversity while at the same time stimulating their rural economy.

The stewardship approach builds resilience to climate change, brings in private investors, secures our strategic water source areas and provides extension support to those living on the land, interacting with our plants, animals, rivers and mountains.

Biodiversity stewardship also contributes to the wildlife economy and is an approach to looking after our natural resources and the needs of the people.

We are hoping to have a deeper understanding of how biodiversity stewardship supports communal land owners and land reform beneficiaries and its immense potential to contribute to our development and biodiversity targets.

We want to achieve the following:

A practical learning platform where lessons learnt are surfaced and shared

Lastly, programmes that can support the implementation of conservation and development initiatives by communities would have been identified and information provided.

In closing, I would like to commend the SANBI Biodiversity Stewardship and DEFF Biodiversity and Conservation teams who were ably supported by the learning exchange planning task team for working tirelessly to put together an event of this magnitude.