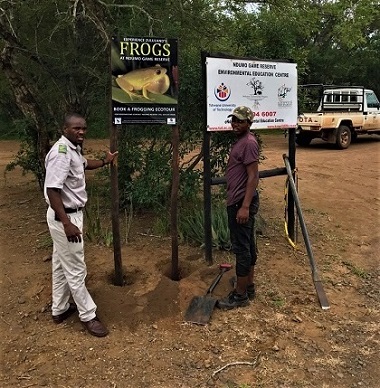 The hustle and bustle of Forum delegates checking out different student posters was dying down and the ‘Green Darkie’ was about to leave his station alongside his poster. It seemed as if he had explained his work to quite a few people and might have been a bit tired after the day’s talks where he also presented his MSc research to South Africa’s biodiversity data fraternity.

The annual Joint Forum for Biodiversity Information Management & Foundational Biodiversity Information Programme was held from 14-17 August at Salt Rock Hotel on the balmy Durban coast. He was surprised that I knew his Twitter name (i.e. Green Darkie) and with a smile quickly explained that he got the nickname working on the production team of the environmental TV show 50/50.

His real name is Fortunate Phaka and earlier that day he gave the annual gathering biodiversity industry players a rundown of what his MSc study was about.

“My project basically, is a recognition that high human population numbers are causing problems for biodiversity. And it is also cited as a problem for global amphibian declines.

“Also, high biodiversity areas, mostly game reserves, tend to exclude surrounding communities. And this is a problem because communities [often] are dependent on these areas. So excluding them just causes more problems,” he said.

Phaka and his colleagues chose Ndumo Game Reserve because it is an ‘ideal model’ for the conflict between conservation and development objectives. Community-based ecotourism has proven to be a good way to solve this conflict.

The study was broken up into two parts with one dealing with frog diversity in the Ndumo Game Reserve which sits in the north-eastern part of South Africa commonly called Zululand.

The other part, which was the focus of his presentation and poster, was getting the local community involved in the conservation of amphibians and developing ecotourism.

“The first part of my Master’s project is the scientific part to fulfil the requirements for the degree and involved studying biodiversity inside Ndumo Game Reserve to compare historic [amphibian] records to current records, and to look at heritage usage and aspects like exclusion – why are frogs found in some habitats and why are they not found in other habitats?

I also wanted to [from historic occurrences to current occurrences] sort out if there are any species declining. Or have any species disappeared from the reserve,” Phaka said alongside his poster. 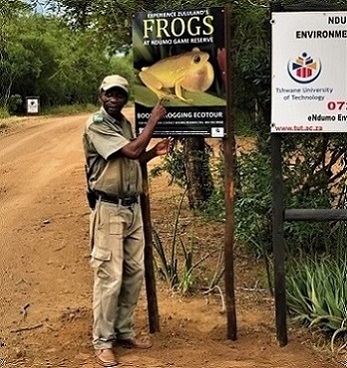 However, the two aspects of the study were not carried out in isolation and the scientific findings were used to inform his goal of adding ‘community value’ to the project.

“In terms of community value I didn’t focus only on Ndumo Game Reserve, I focussed on the Zululand area as a whole, because it meant that I would have more amphibians to focus on and it was going to be more worthwhile because I would include more people,” he said.

“We are trying to stimulate the bio-economy but you cannot get people to plug into the initiative if they do not understand biodiversity.”

In January 2014 the Department of Science and Technology launched the country’s bio-economy strategy, which serves as a road map on how to develop South Africa’s natural biological resources into commercial products in health, agriculture and industry.

To address this gap, Phaka and his colleagues decided to produce a bilingual frog field guide which is on the path to publication under the title “A Bilingual Field Guide to the Frogs of Zululand”.

Yet, he is hasty to add that the production of the book “was done differently”.

From the series of workshops that were held with community members and Ndumo safari guides Phaka, was able to retrieve a wealth of information including isiZulu frog names, rules on how frogs are named, and a survey of interest in frogging among safari guides. With the help of the community and the guides new isiZulu frog names were also formulated.

He also uncovered several isiZulu cultural beliefs around frogs. In a follow-up email Phaka shared some of his findings: “aside from the universal misconceptions of frogs being poisonous or giving you warts if you touch them, I found some other beliefs in Zululand…”

“There is a belief that African Clawed Frogs (isiZulu name: idwi) fall from the sky during heavy rain. These aquatic frogs are seen on land after heavy rain, because they use heavy rain to migrate between water bodies. Uvete or Grass Frogs are believed to bring rain. These frogs are usually the first to be seen before it rains. The cool, and humid conditions before rainfall are ideal for these frogs, so they become very active before, during and after rain”.

“It’s not easy to get people into reserves to do community-based ecotourism initiatives because they need to be qualified guides. And for someone to be a qualified guide costs a lot of money and takes time which I did not have during my Master’s.

“So, one way to solve the problem was working through the crafts market and curio shop and start introducing frogs there and making a direct link between frogs and people’s livelihoods,” he said.

He mentions that the crafts and curios market in the region of his study were very weak and this provided another challenge. The logic behind the thinking was that once frogs entered the crafts market and curio shops they would find their way to the hearts of tourists. This idea was encouraged by tourists in the area expressing interest in frogs, while safari guides were showing interest in including frogs in their list of attractions.

“So, that gave us an opportunity to try and introduce frogging into the list of tourist attractions at Ndumo Game Reserve…and also monitor tourist interest based on bookings.”

The other challenge is that frogs are unlikely to be sole attractions for reserves, according to Phaka.

One of the main reasons is that it is almost impossible to compete with the big five. And also, frogs live in sensitive environments so you don’t want too many people going there because it will cause more problems than it will be doing any good.

Another ‘plus’ was that the Zululand community members had shown interest in learning about frogs.

“They have shown interest in learning about wildlife [basically] and how to plug into the bio-economy and make a living off it,” he said. 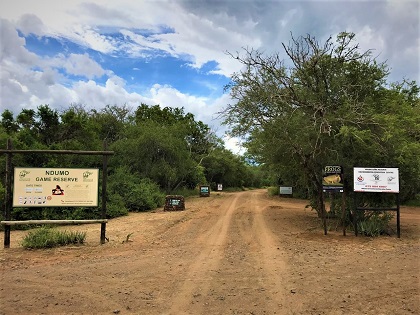 Phaka’s Master’s dissertation is due for submission by October, but making the deadline does not mean the death of the project. His present research serves as a pilot for a PhD which will develop amphibian engagement with local communities on a nationwide scale.

In addition to his studies Phaka is a Youth 4 African Wildlife board member and also serves as the organisation’s Project Director.

Check out Youth for Africa Wildlife.