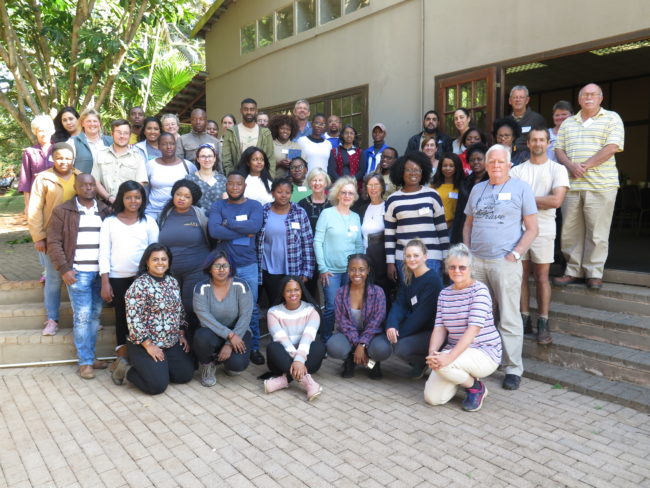 Students, plant specialists and plant enthusiasts alike attended the Custodians of Rare and Endangered Wildflowers (CREW) summer-rainfall region’s annual workshop from 12-14 July 2019 at Canefields Country House in Empangeni, Kwa-Zulu Natal. The venue is set in a sugar cane field which provided an amazing backdrop for the educational weekend.

Surrounded by hornbill calls and an enchanting little garden, the workshop kicked off to a wonderful start on Friday afternoon with Dr. François du Randt, author of The Sand Forest of Maputaland book. He provided an educational tree identification course for beginners by explaining terms, characteristics and functions of the various parts of the tree.

This was a wonderful experience as the many citizen scientists and students in attendance gained much needed tree identification skills from this informative talk. Thereafter he provided a very hands-on approach to tree identification, by providing branches of various types of trees.

With the aid of Professor Theo Mostert, he encouraged attendees to use the “Leaf Key” by David Johnson and Pooley’s Trees of “Eastern South Africa: A Complete Guide” to identify the trees. It was a great interactive way to kick off the workshop and as Dr. François du Randt said, “You don’t have to be a botanist to learn trees!” 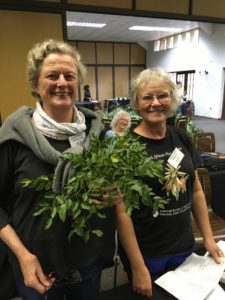 The CREW SSR Workshop had the pleasure of having Botanical Society’s newly appointed General Manager, Antonia Xaba, present at the workshop. She gave a captivating talk about bringing young scientists, students and experienced scientists together as well as showcasing some of the Botanical Society’s priorities.

CREW held an interactive discussion with the attendees. This helped bring new insight and opinions from the students, citizen scientists and naturalists, as well as critical input from the more experienced CREW members about pressing biodiversity related issues.

Ezemvelo ecologist, Sharon Louw, set the scene for the two exciting afternoons in the field, describing the areas and vegetation that we would soon come across.

The first field trip during this workshop was to Enseleni Nature Reserve where we were accompanied by iNaturalist curator, Tony Rebelo. After a long day that consisted of a fun, educational fieldtrip, Tony enthralled us with an insightful iNaturalist course.

The CREW SSR workshop attendees ended the day off with an exciting botanical trivial pursuit. The game had the gears in everyone’s mind turning with the questions and a chance to win various prizes. 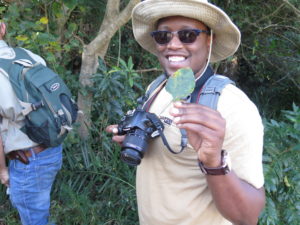 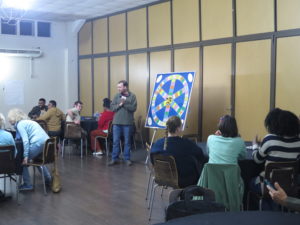 This was the first year in which student talks were focused on showcasing the amazing research being done by the youth of our country to bridge gaps in biodiversity. Nokukhanya Mhlongo, a student at Wits University, gave the first student talk of the workshop on Euphorbia bupleurifolia. Fellow a Wits University student, Portia Kgaboesele, presented on the rare Killickia grandiflora. Tiawoun Andre Patrick, from the University of Venda presented on the critically endangered Brackenridgea zanguebarica. Khanyisile Shabangu, from the University of Johannesburg showcased her work on the Sisyranthus: A poorly known genus.

The various CREW groups in the summer-rainfall region provided enlightening feedback of the fieldtrips they carried out and had the pleasure of seeing some of their highlights in the various presentations.

Sibahle Gumede from the Millennium Seed Bank Partnership gave an informative talk on the MSBP programme; highlighting the various goals they need to meet as well as how citizen scientists and CREW contributions helped reach those goals. The MSBP is nature’s safety net!

Closing off the workshop with the final presentation was Steve McKean from Conservation Outcomes with his talk on the Biodiversity Stewardship Programme that is implementing protected area expansion on private and communal land.

After lunch, the workshop attendees went on a fieldtrip; they had a choice between Ngoye Nature Reserve and the Twinstream Nursery with plant specialists guiding the attendees at both places.

The CREW summer-rainfall workshop 2019 was a remarkable experience as we had many students, national botanic gardens members, plant specialists and CREW members interacting and sharing knowledge. A huge thank you from the CREW team to everyone who made this possible!