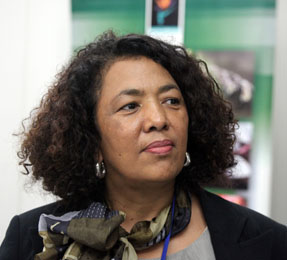 She replaces Peter Schalk, from the Naturalis Biodiversity Center in Leiden, Netherlands, who completed his four-year term as Chair.

Abrahamse was nominated by the Department of Science and Technology.  Her appointment will assist South Africa to maximize the strategic interests in International Cooperation in Science, Technology and Innovation (STI). This is in support of South Africa’s foreign policy objectives in creating a better South Africa and contributing to a better and safer Africa, in a better world.

In her acceptance speech Dr. Abrahamse highlighted the value of biodiversity for development and the role that GBIF plays in providing data for good decision making.

The new Chair of the Governing Board of GBIF, has led a network of institutions and people, fostering a strong biodiversity informatics agenda for Africa.

Abrahamse was the CEO of SANBI for ten years, was previously Deputy Director General of Environmental Affairs, and sat on the inaugural UN Secretary-General’s Science Advisory Board (UNSAB).

She hopes to use her wide national and international experience to further position GBIF as a key player in the global effort to make biodiversity science and its data relevant for sustainable development.

Please see #GBIFGB24  on Twitter for tweets about the event.