Evoking an ancient Egyptian symbol, the Ouroborus cataphractus lizard is endemic to South Africa. This small stocky lizard received its name from its defense mechanism of biting their tail and rolling into a ball to protect is soft underbelly.

The armadillo lizard received its common name from the way it looks when it curls up into its defensive position, which is similar to that of the mammalian armadillo. This diurnal lizard has rows of hard spiny scales covering its body. They have a soft belly which they protect by biting their tail and exposing their scales to deter predators.

The armadillo girdled lizard has a snout to tail length of 12–16 cm. It has a variety of coloration, ranging from light brown, yellowish-brown to dark brown. The underbelly and under-chin area are yellow with black or dark brown markings. Like many other lizards, O. cataphractus can drop their tail as a distraction to predators. They will only drop their tail as a last resort as it is needed for their defensive mechanism.

It has a scrambling gate similar to that of other lizards.

To communicate with each other, Ouroborus cataphractus wag their tails, bob their heads and flick their tongues.

This little lizard is endemic to South Africa, and occurs particularly from Little Namaqualand (Northern Cape) to the Piketberg Mountains (Western Cape) and inland at Matjiesfontein (Western Cape)

Ouroborus cataphractus can be found in rock crevices amongst mountain slopes and rock outcrops. They can forage for up to 18 m from their homes for food. Their habitat is usually dominated by dwarf perennial shrubs. 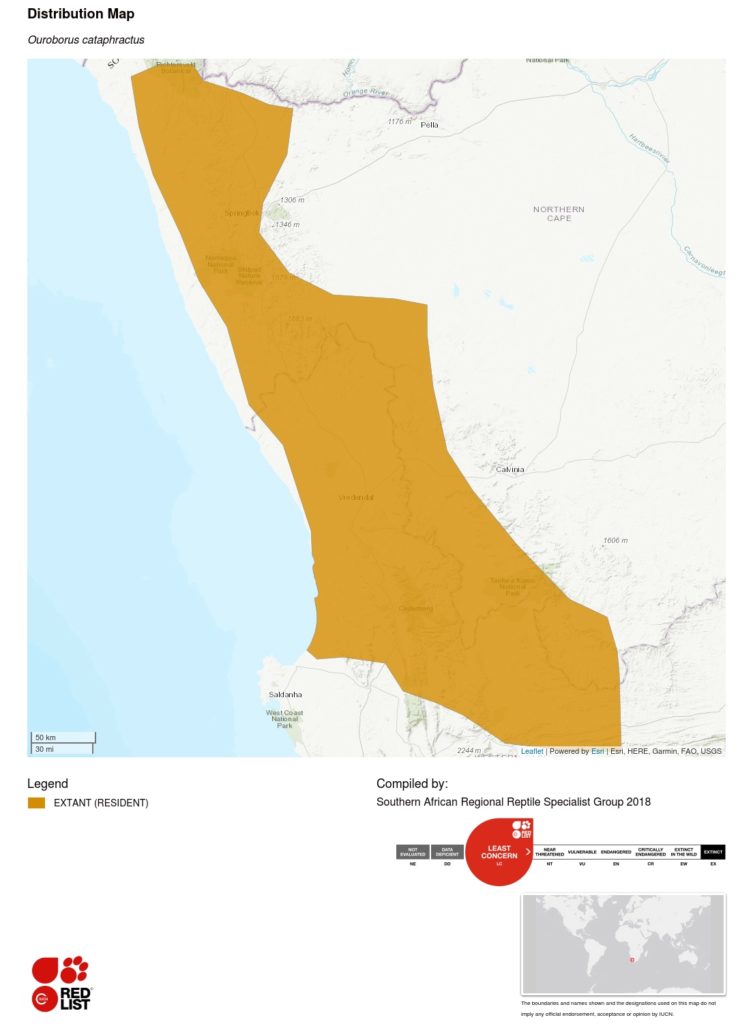 Ouroborus cataphractus are carnivores, and primarily insectivores, with their main diet consisting of termites (Hodotermes mossambicus). The lizards are active when food is abundant and are inactive when food is scarce during the dry summer months. Other prey includes beetles and millipedes, and they sometimes feed on scorpions and plant material.

These lizards are polygynandrous, which means both males and females have multiple partners during mating season (September to October).

The gestation period is around six to eight months. Ouroborus cataphractus is ovoviviparous (eggs hatch inside the mother) and can give birth to one or two live young, which are smaller versions of the adults. The mother may sometimes feed their young, which is not usually seen in lizards.

The lizards are sexual dimorphic with the males being larger. The males are very territorial and especially protective of their female partner.

Adding another unusual lizard behavior to the list; the armadillo girdled lizard is a little socialite. They prefer living in communal groups of almost 60 individuals in rock crevices. Females may care for their young and therefore may skip a year of mating to care for their young.

Ouroborus cataphractus’ primary diet consists of termites, which makes the lizard susceptible to environmental changes that affect the termites such as weather and wildfires.

In winter, when food is scarce, these tiny reptiles reduce their termite consumption. This behavior allows for decreased competition amongst group members for food.

Ouroborus cataphractus’ current status is listed as Least Concern on the IUCN (International Union for Conservation of Nature) Red Dat List. The species was previously listed as Vulnerable from 1996 to 2017, when the status changed as it was reassessed. The Least Concern status was approved on the basis of how widespread the species is, no habitat threats as well as no quantifiable information on the over-exploitation of the species.

As stated, the armadillo girdled lizard lives in large groups so they’re easier to catch. If many individuals are caught within the colony, it would be difficult for the colony to recover due to the low fecundity rate. This is why the trade, illegal and legal, of individuals from colonies can be so detrimental to the population. Ouroborus cataphractus is recorded in CITES (Convention on the International Trade in Endangered Species of Wild Fauna and Flora) Appendix II.

Cordylidae is closely related to the plated lizard family, Gerrhosauridae.

Derivation of scientific name: In Latinised Greek, ‘oura’ means tail and ‘boros’ means devouring. Ouroborus refers to the symbol of a snake or a dragon swallowing its own tail – this symbolises the cycle of birth and death, or infinity.