The National Environmental Management: Biodiversity Act (NEMBA), Act No. 10 of 2004 (RSA 2004), seeks to prevent future invasions, and to manage current invasions to minimise their negative impacts. Through this Act, SANBI is mandated to report on the status of alien and invasive species and monitor for new introductions; as well as provide scientific advice on their management. Alien and invasive species have been identified as a threat to South Africa’s marine biodiversity and as such a new programme of work has been initiated to address this.

The SANBI Marine Programme, in collaboration with its partners, has initiated a project to revise and update the list of marine alien species. This includes prioritising identified research needs, increasing human capacity and providing scientific advice on management and potential eradication of these species.

The 96 marine alien and invasive species recorded along the South African coastline are spread across 15 phyla. The image above shows the percentage composition of these phyla along with some examples of the species within each phylum 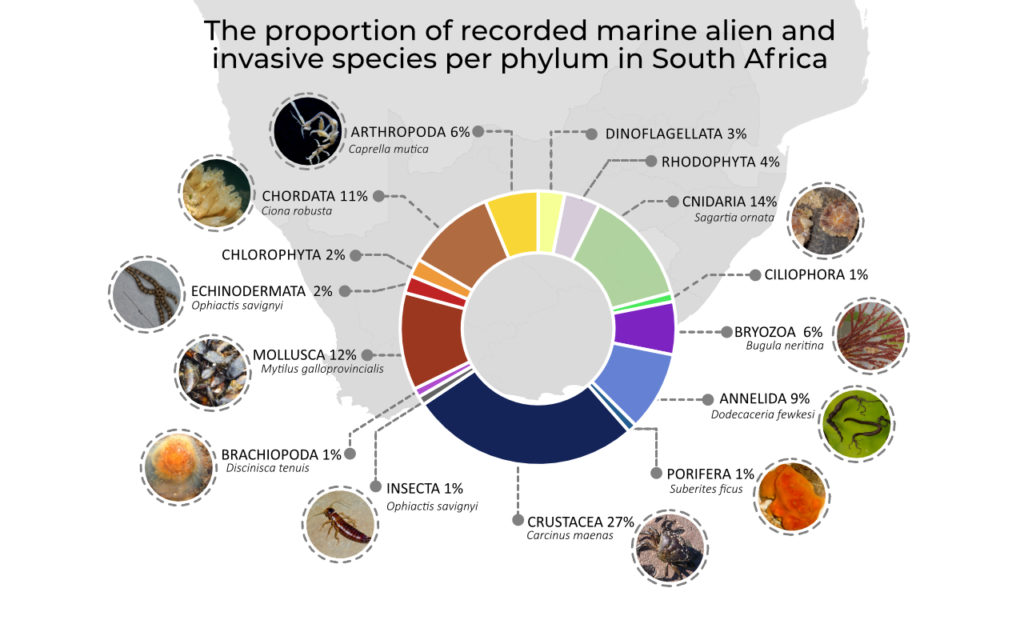 The Marine Programme is currently compiling species pages for marine alien species in an effort to inform risk assessment and to prioritise for barcoding of these species. Additionally, in order to facilitate the development of a national distribution map of marine alien species, the Marine programme is currently running a project on iNaturalist for South African citizen scientists and the public to upload their observations.

The availability of information is often the barrier between important issues and public awareness. In an attempt to bridge this gap, the Marine Alien and Invasive Species Researcher at SANBI created an easy to read booklet that can be used as a ‘field guide’ for marine alien and invasive species. The purpose of creating the booklet was to raise awareness to members of the public who work in harbours or ports, marine protected areas and people who live along the coast so that they are able to identify and report any sightings of these species. 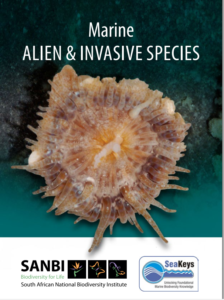 The booklet gives short descriptions and images of 16 alien and invasive species, their impacts and the habitat that you are most likely to find them in. In the event of identifying any of the species described in the booklet, we encourage people to use the contact information provided at the back of the booklet to report the location.

This updated list of 96 marine alien and invasive species recorded along the South African coastline is made up of 15 phyla, the majority of which are Crustaceans (eg. Barnacles, Crabs), Cnidarians (eg. Anemones) and Molluscs (eg. Mussels, Oysters, Worms). Many of these species are found in artificial habitats such as harbours and ports, aquaculture and oil and gas infrastructure while some are found in natural habitats.