The overarching research programme at the Compton Herbarium is to document the plant diversity of the Greater Cape Floristic Region (GCFR). Research activities here include the identification and description of new species, the production of taxonomic revisions and monographs, compilation of checklists and databasing accessions. Many of these studies are conducted in collaboration with local and foreign scientists. Although several plant groups in the GCFR are well-documented, many are poorly understood and in need of detailed taxonomic study. Scientists at the Compton Herbarium have played and continue to play an important role in the documentation of the plants of the GCFR since the herbarium was founded in 1925. In addition to their research activities, the scientific staff curate the collections and provide several service functions, mainly in the form of plant identifications.

The Cape Floristic Region and the Succulent Karoo region are two of 34 internationally recognised biodiversity hotspots. Together, these two regions comprise the Greater Cape Floristic Region (GCFR), which constitutes one of the world’s richest temperate floras in terms of species diversity. Approximately 11 530 vascular plants species are known from this region and about 70% of them are endemic. Two principle biomes occur within the GCFR; Fynbos and Succulent Karoo. Although Fynbos covers only about 4% of the surface area of southern Africa, almost 44% of southern Africa’s 20 500 plant species occurs in it. Succulent Karoo covers about 9.5% of the surface area of southern Africa and contains about 24% of its botanical diversity. 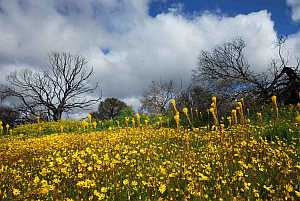 Compton Herbarium staff are involved in contributing to the following regional Floras.