The National Herbarium collection currently contains approximately 1.2 million specimens, of which over 900 000 are computerised in the PRECIS database. Most specimens are from southern Africa, but the collection extends into the rest of Africa and surrounding islands and includes small collections from outside Africa. Vascular plants, bryophytes and lichens are also represented. 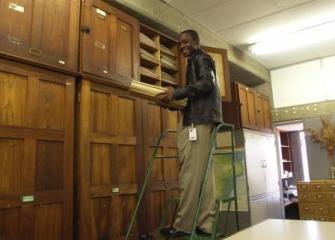 The collection is housed in four large wings (collection rooms), each wing being named in honour of a previous director. The plant specimens are kept in modern steel cabinets with magnetic sealing doors or in old wooden cabinets and numbered and arranged according to the Englerian system.

The collection contains many historical specimens from early collectors as far back as the 1800s, valuable collections that were donated to the National Herbarium, as well as specimens collected by staff over the years. Specimens of cultivated plants are also housed in the herbarium.

Bryophyte and lichen specimens are kept in a vertical file packet in standard broad-side card filing cabinets. No taxonomic lichen research is conducted at the moment. 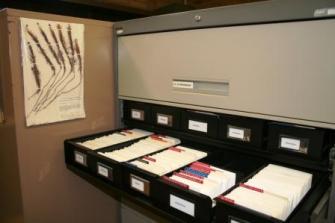