The Biodiversity and Land Use Project was initiated in 2015 to support municipalities in effectively regulating land use to ensure that biodiversity continues to provide essential ecosystem services to municipal residents. The South African National Biodiversity Institute (SANBI) is currently implementing the project, together with its partners, with funding from the Global Environment Facility (GEF) though the United Nations Development Programme (UNDP).

The overarching objective of the project is to:

Minimise the multiple threats to biodiversity by increasing the capabilities of authorities and land owners to regulate land use and manage biodiversity in threatened ecosystems at the municipal scale.

The first component of the Project deals with land-use management, regulation, compliance and enforcement. The Project aims to encourage the uptake of biodiversity considerations into municipal planning and decision-making, with an emphasis on strengthening biodiversity content in Integrated Development Plans and Spatial Development Frameworks. In addition to land-use regulation, the project aims to work with relevant government departments to develop and implement other environmental management tools in support of improved biodiversity mainstreaming. It also aims to increase the capacity of regulatory authorities to carry out their functions more effectively with regard to biodiversity.

The project will illustrate the possible financial gains from incorporating ecosystem services into municipal planning, which will ultimately promote increased budget allocation for investments in ecological infrastructure within municipalities.

The second component of the Project focuses on improving the management of land and natural resources, to ensure that priority biodiversity is able to persist in a healthy functioning state. Most of the biodiversity priority areas in the target districts are on land that is either privately or communally owned. Thus, the Project will involve the implementation of biodiversity stewardship agreements on private and communal land.

Natural resources and functioning ecosystems are the basis of life, economic activity and human well-being. South Africa has a vast wealth of biodiversity that supports the production of ecosystem services that are essential for economic growth and social development. The integration between biodiversity, sustainable development and human communities is most relevant at the scale of local government.

Municipalities are directly responsible for the provision of services to communities, including social and economic development and a safe, healthy living environment. Municipalities are also the foremost level of government responsible for land-use planning and decision-making. Legislation requires that municipalities develop Spatial Development Frameworks that enable them to make land-use decisions based on desired patterns of economic growth and sustainable development.

Municipalities however face multiple challenges relating to poverty, unemployment and service delivery. Limited capacity and co-ordination also results in ineffective environmental governance. In addition, provincial and national government departments have a mandate to regulate land-use and enforce environmental management legislation. Improved collaboration between these departments and municipalities will achieve better outcomes for biodiversity at the municipal level. By supporting municipalities to address these challenges, they will be better able to perform their mandate for service delivery and biodiversity conservation. 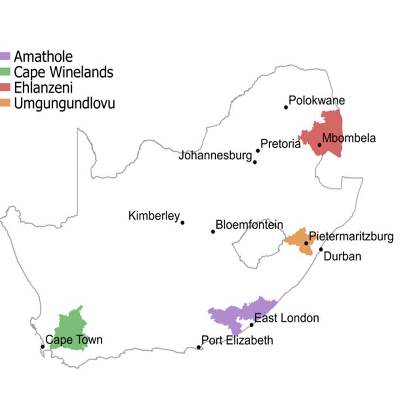 Amathole District Municipality is located on the south-eastern seaboard of South Africa. The municipality hosts high species diversity at the intersection of five different biomes. About 1.7 million people live within the municipality. The area is mostly under communal land tenure, with small-scale crop farming and open grazed livestock. Biodiversity and ecosystems are subject to pressures from spreading urbanisation, commercial agriculture and plantation forestry, overgrazing, mining, industrial activities and wind farms.

Cape Winelands District Municipality in the Western Cape is found between two globally recognised biodiversity hotspots, the Succulent Karoo and Cape Floristic Region. It has extraordinary endemism and diversity of succulent and vascular plants, invertebrate species, specialist insects, freshwater fish and birds. The municipality is home to 650 000 people. Much of South Africa’s wine is produced in the area, and it is also an agricultural centre for deciduous fruits and vegetables. Overconsumption of water, damming of rivers and water pollution has compromised the ecosystem functioning in this municipality.

Ehlanzeni District Municipality is located in Mpumalanga province. Over 70% of all South Africa’s vertebrates occur in this area, including a very high diversity of mammals and birds. The municipality has a population of 1.6 million. The tourism industry plays a central role in the district, with Kruger National Park as one of the major tourist destinations. Land in much of the district is the subject of prospecting or mining rights, and commercial forestry, urban and informal settlements are expanding. The municipality faces a number of challenges with regard to land ownership.

uMgungundlovu District Municipality in KwaZulu-Natal, falls within one of the most diverse corridors in the Maputaland-Pondoland-Albany hotspot. A large percentage of this district is comprised of high-yield water catchment areas, with numerous Freshwater Ecosystem Priority Areas. Just fewer than 1 million people live in the district, where there is mixed land use on commercial livestock farms and a strong emphasis on tourism. Extension of urban areas, major infrastructure and ‘ribbon’ development along the N3 corridor, are driving biodiversity loss. Water demand for the municipality and downstream users exceeds supply.

For more information on the Biodiversity and Land-Use Project, please email blu@sanbi.org.za.

At the end of November 2017, the UNDP concluded its midterm review on the project. Please click here to access the Independent Midterm Review report.

Implementation partners include the following:

SANBI also works with other strategic partners in the implementation of the project, including but not limited to:

The Biodiversity and Land Use Project produces a number of resources through their work in the the following areas.  Please click the hyperlinks for more information:

This is a great achievement for the project at mid-term as a satisfactory rating is the second highest rating one can achieve. Ten recommendations were put forward by the reviewer. Click here to access the Biodiversity and Land Use Project’s Independent MidTerm Review report.