Money for adaptation: The Adaptation Fund and Green Climate Fund in South Africa

People will have to find ways to adapt to life in a world where weather patterns are less predictable, and more turbulent. For poorer and vulnerable communities, this kind of ‘adaptation’ will often call for locally-appropriate development projects, and funding support to allow them to happen.

The Adaptation Fund and Green Climate Fund are global funds that are geared towards financing projects that have concrete, on-the-ground benefits that will help communities deal with the fallout of climate change. Countries access money from these funds via Accredited Entities, who then work with partners to design and implement approved projects.

The South African National Biodiversity Institute (SANBI) is an Accredited Entity of both the Adaptation Fund and the Green Climate Fund. Appointing a national institution like SANBI to take on this role is important, because it encourages country ownership and ensures that projects are aligned with national development priorities.

The Adaptation Fund has made a total budget of about R109 million (US$10 million) available to South Africa and began funding two projects in 2015:

These pilot projects will help with rolling out other adaptation projects in future, across the region or even internationally.

The Green Climate Fund approved SANBI’s accreditation in October 2016 and over the next few years, SANBI will collaborate with project partners from across South Africa to develop its project pipeline. 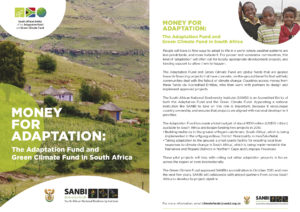